The Most Magnificent Idea, written and illustrated by Ashley Spires. Kids Can Press, 2022. $21.99 ages 4 and up 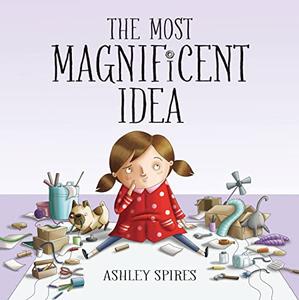 "The girl returns to her workshop,
but still no idea.
She looks around for inspiration ...

She could build a mobile, but she's
already made four of those. Or some
cat toys for the neighbor, but she made
a boxful last week."

In this sequel to The Most Magnificent Thing (Kids Can, 2014), the girl who loves to make things is back. Her canine companion is always at her side. This tiny engineer is the one with the ability to be the maker. Her ideas range in awesomeness from good to great to magnificent. Her brain is ALWAYS full,  until today. She has no idea what to make, and that has never happened to her in the past.

She isn't too concerned at the start of the day. A walk seems fitting for accessing ideas. Together, the two travel the neighborhood, helping and strolling happily. Upon their return home, she is unable to come up with any new idea. She searches everywhere, to no avail. Beginning without a concrete plan in mind, she fails. A break from old habits doesn't work either. Deciding to remain in place until an idea forms leaves her grouchy and discouraged.

"She shuts her eyes, plugs her ears and holds
her breath to FORCE an idea into her brain."

Nothing works. It isn't until she discovers a mischievous kitten, who is always fleeing the confinement of home, that her brain clicks into gear, and a 'most magnificent idea' manifests itself to her. Confidence restored; she is back to her old ways the following day.

The entertainment is evident for readers listening to this story of creativity, and fear. They will be keen on her finding some new inspiration as she struggles with a brain freeze. Turns out that all she really needs is some patience, and the opportunity to help others. Always appealing art is welcome and expected from the funny and very creative Ashley Spires.

Posted by Sal's Fiction Addiction at 10:04 AM