Counting in Dog Years and Other Sassy Math Poems, written by Betsy Franco and illustrated by Priscilla Tey. Candlewick Press, Penguin Random House. 2022. $24.99 ages 8 and up 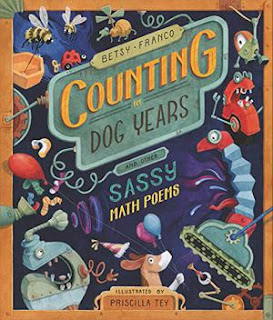 One fifth of me
loves shooting hoops
or scoring
a soccer goal.

Five fifths combined
make all of me.
I'm a living,
breathing whole!"

I am always on the lookout for new poetry to share with kids and their teachers. What about pairing poetry and math? That's exactly what Betsy Franco has chosen to do for this new book. It is a lot of fun for all. The 20 poems are divided into four separate sections: Hanging Out at Home, Math Musing, School Daze and finally, Last Bell, School's Out!

I found a favorite or two in each section. It was difficult to choose the one I would use to open this post. In fact, I have changed the opening twice already as I go back and read some poems again. Readers will find numerous ones to share with their friends and classmates.

The topics are many, and Ms. Franco's way with wordplay make them appealing and relatable for her audience.

"Do numerals get out of sorts?
Do fractions get along?
Do equal signs complain and gripe
when kids get problems wrong?”

Offering a host of complaints from those trying to figure out things that are often annoying in terms of math and numbers, the poet also includes a guessing game, a poem to perform with a friend, and even a group of number palindromes.

Priscilla Tey creates gouache artwork that is funny, frantic, and downright serene, in keeping with the mood of each poem included. There is lots here to make readers snicker, while also speaking to truths they know at home and at school.

"Today, when she said, "Just a sec,"
I timed my mom ... and then
one hundred seconds tick-tocked by -
she'd pulled her trick again.

Careful word choice and a genius mix of number and math concepts, make this great fun to read out loud, to think about, and to respond to the concepts being considered. It's a terrific addition to any home or classroom library where it is sure to find fans.

"That’s three months of summer
but nine months of school!
It must have been grown-ups
who made up
that rule!”