The Boreal Forest: A Year in the World's Largest Biome. Written by L. E. Carmichael and illustrated by Josee Bisaillon. Kids Can Press, 2020. $19.99 ages 9 and up 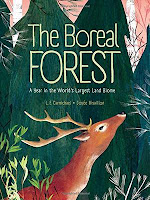 "Near a different lake, high in the
mountains, spring sun warms a
stately fir. Perched in its branches,
a sable yawns, basking in the light.

In the frozen soil, the tree's roots find only ice. But there's still a little moisture stored in its trunk. Water pumps from trunk to branch to twig to needle. The tree breathes in, waking from its winter slumber."

Beauty is found at every turn of the page in this very special book about the boreal forest. The author leads off with a welcome to the forest itself. A meaningful opening explains how the forest has come to be, and how it sustains itself. The following spread provides a world map that places the forest across most of Canada, Alaska, the Scandinavian countries and Russia. A chart provides the percentage in each country that is boreal forest and adds:

"There's more fresh water in the boreal forest
that anywhere else on Earth, with more that six
hundred thousand lakes in Canada alone."

Ms. Carmichael then goes on to describe in accessible, conversational text the boreal forest as it is seen in each of the four seasons. Several relevant information boxes are included to add interest and to provide a great deal of data on this largest land biome. The descriptions are lush, and captivating. The mixed media and collage artwork is quiet and elegant, lending a comfortable air to the entire design. Easy to follow and filled with detailed, informative text, this book will find fans at every turn. The fact that it ensures the inclusion of Indigenous knowledge and leadership is both welcome and necessary.

Once the seasons have been described accurately and with careful attention to all aspects of the environment, the author adds both the water cycle and the carbon cycle, and discusses climate change within the forest itself.

" The boreal forest is a "carbon sink," meaning it captures and stores more carbon dioxide that it releases into the atmosphere. That's one way the biome helps slow climate change. But the boreal forest is warming up, and it's warming faster than many other parts of the world. As a result, the biome's role in the carbon cycle has already begun to change."

Worthy of attention, and perfect for those interested in our world's natural resources.
Posted by Sal's Fiction Addiction at 10:00 AM