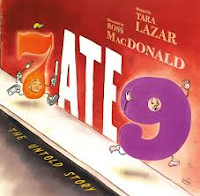 "Seven, seven, SEVEN!
It's like I don't exist. Folks
hurry right past me on their
way to 10! Don't even get me started on 10. Everyone thinks he's perfect!"

I read this book to two groups of teachers this month. I also read it to two groups of kids. Same effect: laughter, conversation, high interest. Rather than add it to a general list of new picture books, I added it to the list specifically designed for older readers. As I have said before, I think we need to look carefully at the ages publishers suggest for interest level. Many picture are much more appropriate for older readers, rather than the 4-8 year olds often touted as the reading audience. We definitely do not want older readers to buy into the premise that picture books are not suitable for their reading pleasure and interest. Little ones would not appreciate or understand the 'punny' language concerning math presented here.

All that being said, this is a terrific math mystery narrated by Private I. His client? A terrified number 6. He's in need of help to find 7, who is after him because he has already eaten 9.

It goes on and on, one perfect pun after the other - all referring to numbers and number concepts. It takes some time, but I gets to the 'root' of the problem. 9 has disappeared, and I is on the lookout for the perpetrator, 7. When he discovers that 7 is on vacation, his search takes a turn. I rushes back to his office, confronts the counterfeit 6 and demands an explanation. 9 is furious with 7 and all the attention he gets, and wants him to pay the piper. I can't believe it!

"I zeroed in on 9. Are you kidding?
You should be on cloud nine right now.
Happy as can be, the whole nine yards!"

Are you sure you're ready for it?

"Because you've got NINE lives!"

Much too complicated for most little ones, don't you agree?

Detective speak, nostalgia-laced artwork, and clever writing make this a book to be enjoyed many times over. The artwork is created 'using colored pencils, watercolors, and 19th-century wood type, then composed digitally using Photoshop.' Makes for a film noire vibe and includes many fine details that the most observant readers are sure to point out.

Mystery solved. Don't miss it!
Posted by Sal's Fiction Addiction at 10:00 AM