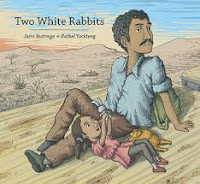 "When we travel, I also
sleep and I dream that I
am moving, that I'm not
stopping.

But we do stop. Because
the people who are taking
us don't always take us
where we are going."

What stands out for me throughout this powerful and emotional
story is the strength of the love that exists between a young girl and her father. The two are travelling together. While the trip is extremely tiring for the father who is a migrant looking for a better life for the two, the daughter is naïve to the dangers and the stress that accompany them. It is the story of far too many as Patsy Aldana, President of the IBBY Foundation, writes in an endnote:

'The father and daughter in this book are leaving their
home and the world they know and love to go to a
different country. Maybe it is because the father cannot
find work and a way to support his daughter at home.
Maybe because the world they live in has been destroyed
by violence, war and danger. We don't know."

Because the child is the narrator, the story is full of adventure and love and an interest in what is happening around her as they travel. She and her Papa leave with what they can carry. As they go, she counts chickens, and animals, and birds. Their journey is long, and complicated as they find ways to move from one place to another. They cross a river by raft, the countryside by rail, always accompanied by a coyote (surely a symbol of those who prey on the desperation felt by so many).

With her father near, she is often oblivious to the dangers inherent in such a journey. Always she has her tiny stuffed rabbit for comfort and familiarity. They run from soldiers, and stop when Papa must work to make enough money to move forward. She makes a friend while her father works. As he says goodbye, the boy trades his two white rabbits for her small stuffed one. As they approach a wall in the desert, the rabbits are released and we are left to wonder how their story will end. We do not know.

Perfectly conceived and beautifully illustrated, it is a story that will be interpreted in different ways depending on the age of the children listening. The digital artwork adds a poignancy that is palpable, including many details that are hinted at in the text. Every page adds to the sadness inherent in similar stories being told around the world. It should spark discussion and empathy for those whose bravery and desperation lead them to make very difficult decisions for their future.

Posted by Sal's Fiction Addiction at 7:52 AM