See What A Seal Can Do, written by Chris Butterworth and illustrated by Kate Nelms. Candlewick Press, Random House. 2013. $17.00 ages 4 and up 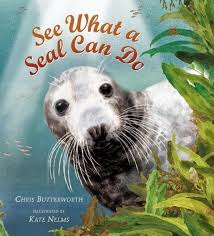 "Seal's not the only
hungry one down here:
bigger things than him
are looking for their supper.

His long whiskers are his
feelers:
they twitch as a silent swirl
of water tells him there's a
killer whale on the hunt for
a plump seal meal."

Don't be fooled into thinking that seals do nothing but snooze on rocks and beaches, whiling away their days in the sun and sand! There is much more to their days than that. On land they seem clumsy and slow, flumping along from one place to another.

"(A flump is a flop and a jump both together:
it's how a seal gets about on dry land.
It's not stylish, but it works!)

Once it enters the nearby water, its grace and strength are something to behold. It moves with incredible speed. It dives deep into the ocean on the hunt for food, all the while keeping watch for predators. Diving to a depth of three hundred feet, it finds food and stays warm despite the cold of the ocean waters:

"He has two fur coats that keep
him waterproof,
and a thick layer of fat under his skin
wraps around him like a blanket."

This is perfect nonfiction for kids who are always wanting to know about the animals of the world.
It is a celebration in text and art. Chris Butterworth did her research and shares it in a most accessible way, combining a lively poetic text in one font, and adding further descriptive information in a smaller one. That makes it clear to her readers which tells the scientific story of this particular gray seal, and which gives readers a chance to add to their store of facts about it. Other writers use this same strategy, not always with the same captivating results.

This is Kate Nelms' first illustrated book. You will recognize as soon as you see the cover the promising future she has in picture book illustration. The captioned endpapers allow her readers a close-up look at the eighteen different kinds of true seals that exist in ocean waters. The sandy horizon gives way to the beauty of underwater life when the seal powers itself into the light-infused depths. The mixed media artwork is an invitation to young readers to explore the ocean's beauty.

There is so much here to learn, and no  more perfect way to learn it! 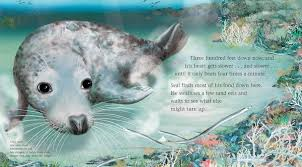