Hocus Pocus Takes the Train. Story by Sylvie Desrosiers and illustrations by Remy Simard. Kids Can Press, 2013. $16.95 ages 3 and up 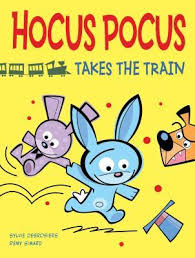 This sequel to Hocus Pocus (Kids Can, 2011) is just as much fun as the first one. In fact, it might lead readers who did not see that one right back to it. It's a comic book adventure and sure to attract new fans with its quirky characters, its sly humor and its innate appeal for those who love wordless books. A lot can be said without saying one word!

This time the Magician, his cranky (at times) dog and his hatful of rabbit are off on a train trip! They have a bit of time before the train pulls out, so decide to stop for a coffee and a quiet sit. Hocus, with his ever-inquisitive eye for adventure, takes note of a purple rabbit close by and tries to get its attention. Nothing works, so Hocus moves closer. After many attempts to get a response from the stuffed rabbit, Hocus turns to see that his 'hat' and the rest of the troupe are on their way out. Stymied in his attempt to extricate himself and catch up with his pals, he notices a baby crying for its lost rabbit.

Not wanting the baby to be sad, he returns to rescue the purple toy and makes a beeline along the tracks for the last train car, only to be stopped by his arch nemesis, the Magician's dog! Hocus is much too smart to be left behind; it takes all his ingenuity to fashion a solution to the runaway train. Soon, he catches up, pulls himself aboard ands puts his plan to return the lost bunny into action. It isn't without its difficulties!

The dog gets its comeuppance, and Hocus is able to set things right.

The brightly colored cartoon artwork, rendered in Adobe Illustrator, is sure to hold a young reader's
attention. Sound effects beg to be read aloud, and with expression. The appealing characters are cleverly constructed. It is a story that is both funny and touching, and most assuredly makes us long to see more of this series. 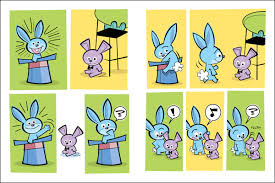