Ringed Seal, written by William Flaherty and illustrated by Sara Otterstatter. Inhabit Media, 2022. $15.95 ages 6 and up 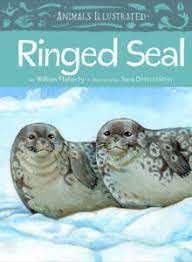 "Like other marine mammals, ringed seals
are covered in a thick layer of fat called
"blubber". Blubber helps keep ringed
seals warm in the cold water of the Arctic
Ocean. Blubber also stores fat and proteins
that ringed seals need to survive."

Young readers love to read about animals, and this series is perfect fare for them. The "Animals Illustrated" books from Inhabit Media look closely at Arctic animals that may or may not be familiar to all. This newest addition is written by a conservation officer who lives in the north and knows his stuff.

He writes engaging text about the ringed seal, its appearance and size, and its importance to northern communities. These seals occupy a wide range, from the Canadian Arctic all the way to Arctic Europe. It is interesting that they spend most of their time alone on the ice or in the ocean, and only in a group while mating. The farther north, the more ringed seals.

Mr. Flaherty explains that ringed seals have powerful claws making them excellent at digging. They keep their breathing holes open at all times. He also discusses blubber, diet, babies, and predators. He tells readers that these seals are intelligent and very difficult to catch.

"In the wintertime, ringed seals will even send bubbles up to the surface before actually surfacing to breathe to see if a predator is waiting above."

Once caught, they are used for food, to make tents and boots, and their bones are used to create games and toys for children.

Sara Otterstätter's illustrations expand learning with detailed images that show this most common seal in their Arctic habitat. Clear and informative, this is an excellent book for early years students as they learn to research. 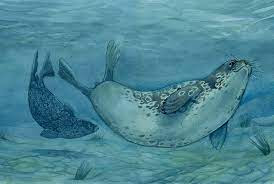