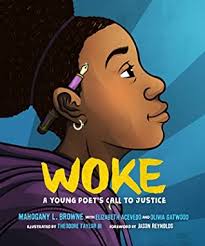 of leaders who came before

and made the world better;

so that uttering letters

Three women poets offer meaningful messages to raise young readers' awareness of and need for social justice in the world.  By being 'woke', readers will learn to see what is going on around them, and to choose to stand for freedom and justice for all. They connect this rise in awareness to many historical and contemporary movements focused on having a voice for freedom and acceptance. The poems are as varied as the perspectives each poet has concerning justice.

In his introduction, Jason Reynolds explains:

"It's a collection of proclamations, megaphoning to the young world that they are human and therefore have the right - I'd even go so far as to say the obligation - to talk back, to speak up, to connect with the fortifying elements outside of them, as well as those that exist within."

Each poem is placed on a double-page spread, accompanied by a contextual and colorful illustration that boldly represents the powerful words. Beside each page number, alphabetized subject headings are included. This allows a reader to quickly access the poems that hold a particular interest. There is variety in form, as well as subject matter and voice. Some are quiet and encouraging; others are louder with a call to action. Topics include immigration, gender, ability, empathy, and equality.

In her poem about stereotyping, Olivia Garwood encourages readers to resist putting people in boxes:

"So resist the box!

Why have a box

when we could have a swimming pool

or a trampoline instead?

A playground or a giant green field?

We don't need those silly squares!

We need to let everyone be

exactly the way they are

so that we can be too.

And isn't that so much better

than a boring old box?

Readers will find wonder here - and challenge, and thoughtful contemplation, and a need to make changes in the only way they can. Bravo! 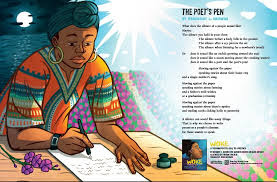