What If Soldiers Fought With Pillows?: True Stories of Imagination and Courage, written by Heather Camlot and illustrated by Serge Bloch. Owlkids, 2020. $19.95 ages 9 and up 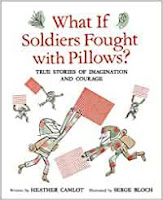 "The director of the Dutch National Ballet saw the documentary, raised money, and brought Joudeh to the Netherlands to study dance - just before he would have to serve in the Syrian army and have to give up his dream. Now a professional dancer and choreographer, Joudeh does everything he can to help others - from sharing his story, to raising money for refugees, to dancing ... "

Joudeh's story is told following a question that asks, "What if everybody showed up to a political party with their dancing shoes on?" That page's introductory sentence explains: In the fight for peace and survival, ballet beats bullets for one Palestinian dancer.

That what if question is only one of fifteen meant to give readers pause to think critically about how and what they feel when they hear it. Narrating a true story about activists who are not well-known for each of the imaginary premises is sure to inspire and offer an outlet for imagination and admiration. Each entry illuminates a story of peace and compromise, and shows what can be done when the world is pictured in a hopeful and inspired way.

The design makes the entries very accessible. Two pages for each question: one is sketched by Serge Bloch to extend its meaning, while the other provides the explanation for the subject's inclusion. It is an intriguing way to look at changes that have huge impact. It is a call to readers to help make changes that matter. It sparks imagination, bravery and a feeling of hope in a world where it is needed.

A glossary, endnotes, and selected sources follow, and provide for further study.

"In Nazi Germany, if you didn't shoot down the enemy. you could be punished by being shot yourself. Stigler knew this and still chose not to follow orders. He couldn't fire on a defenseless plane and crew. It would be dishonorable. It would be the action of a monster. Brown couldn't forget that day. Decades later he looked for Stigler - and found him living in Canada. Almost forty-seven years after meeting in the air over Germany, they met face to face in Seattle, Washington. Together they embarked on a new mission: to share their incredible story with young and old - from students to veterans - across North America, not as feared enemies but as close friends."

“We do not need magic to change the world. We carry all the power we need inside ourselves already: we have the power to imagine better.” (J.K.Rowling)
Posted by Sal's Fiction Addiction at 10:00 AM