Go Show the World: A Celebration of Indigenous Heroes, written by Wab Kinew and illustrated by Joe Morse. Tundra, Penguin Random House. 2018. $21.99 ages 6 and up 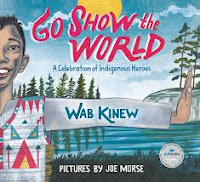 "These, a few of my heroes,
maybe now your heroes too.
Let's look ahead at our lives,
think of what we want to do.

Maybe be a doctor
or movie star, it might happen.
Maybe we do both,
like our friend, Evan Adams."

In the section called Biographies that follows the text of this book, Wab Kinew shares this:

"Dr. Evan Adams
(1966 - present) is a Two
Spirit physician and public
health official from Sliammon
First Nation in British
Columbia, Canada. He is also a
well-respected actor who has
appeared in movies like Smoke
Signals and many theater
productions. Today he works
as the chief medical officer for
the B. C. First Nations Health
Authority."

In his first picture book, Wab Kinew introduces his readers to indigenous heroes whose lives and actions have made them worthy of attention and admiration. A singer and musician, Mr. Kinew wrote the rap lyrics used to honor the leaders chosen, and to spark confidence in those who read it.

He begins with men and women from past history who remain an inspiration:

"Before he made the big leagues or won Olympic Gold
little Jim Thorpe ran all the time, I'm told.
His twin died at boarding school, leaving Jim alone.
All he knew to do was run,
so ran the whole way home."

Most page turns introduce a new person of interest to those reading. They will learn about historical and contemporary heroes, always with just enough information to encourage a further look at that person's life. Both Canadian and American, each has impacted the world they live in. Not all will be familiar, but they have all had an impact. Back matter includes brief biographical information for all, accompanied by a pencil sketch.

Joe Morse has created exceptional images using watercolor, digital color and collage. The linework, textures and color palette are sure to encourage readers to take time to pay careful attention. Filled with expression and details from the historical times, they add important context. His final spread of a northern landscape with three children in the foreground, looking up (and forward, one can hope) at the beauty of the northern lights. Smiles on their faces and hope in their hearts, the text reads:

"We walk on the same lands as the heroes celebrated
in this book. I hope their examples can help each of us, big
and small, relearn that the lands are sacred and we ought
to respect them. I also hope their stories of triumph over
adversity inspire each of us to reach our full potential."
Posted by Sal's Fiction Addiction at 10:00 AM