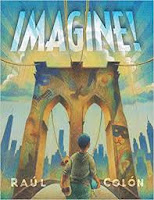 "A boy passes a museum
many times but never goes
in.

I trust that you are fans of the incredible artwork in books illustrated by Raul Colon. In his latest wordless picture book he proves, once again, how imagination has inspired him to think, to create and to honor its power.

A young boy sets off from home, skateboard under his arm and helmet on his head. His journey takes him through New York streets and over the Brooklyn Bridge to the doors of the Museum of Modern Art. As he wanders through and admires all there is to see there, he imagines that characters from the paintings join him in a joyous dance. Following this pied piper of imagination, they follow him outside into the streets, through Times Square, and onto the subway for a visit to some of the most recognizable New York destinations. The ride the Cyclone at Coney Island, stare down at the world from the Statue of Liberty's crown, eat hot dogs from a street vendor, and share a song in Central Park.

When the time comes to return to the museum, they hail a yellow cab and head back to the home of artworks so many admire ... Picasso's Three Musicians, Rousseau's The Sleeping Gypsy and Matisse's Icarus. The boy collects his helmet and board and makes the return trip. On his way, he notices a blank wall that begs for splashes of color. Taking inspiration from the experiences of his wondrous day, he does himself proud. Absolutely breathtaking!

Raul Colon uses watercolors, Prismacolor pencils, and lithograph pencils on Arches paper to fill this book with light, movement, texture, and wonder. In an author's note he explains that he did not visit an art museum until he was an adult. What might have happened had he visited as a child?

"I believe that visiting the art museum and experiencing all the other countless works of art I knew only through reproductions became one the most rewarding experiences in my development as an illustrator. My mind was freed and I felt compelled and confident to express what was inside me and to create what wasn't. Seeing the works of great artists then and now gives me inspiration and stimulates my imagination." 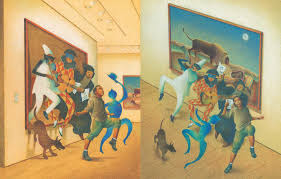