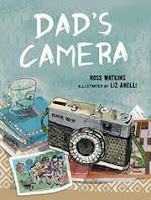 "Mom asked him why he didn't take a photo of us, but he wouldn't say. He just put the camera to his eye, pointed it at his cereal bowl, his coffee cup, and clicked. Dad took photos of the things he didn't want to forget. When Dad finished his first roll of film, he took it to an old store in the city to be developed. He came home with a thick envelope under his arm, went straight into his study, and stuck the photos across the window."

As the agony that is Alzheimer's Disease becomes apparent in the narrator's father, it is apparent to his son and the boy's mother that he is taking photographs of everything but his family. As his memory grows worse, Dad starts putting things away in funny places. The doctor has explained the progression of the memory loss. It doesn't make it any easier for his family that they know that.

As he takes pictures of the minutiae of things that are part of his everyday life, the son assumes his dad wants the photos to help him remember. As the films are developed, Dad places his photos on the window until it is filled with the many pictures he has taken. His wife is angry that there is no family picture among them. When he comes home one day without his camera, they assume he lost it.
Upon his death, they learn what happened to the camera and what Dad had left for them. One photo from one roll of film ... the most important one of all.

Using collage, watercolor and digital coloring, Liz Anelli is able to capture the emotions of the family as they lose their loved one to advancing disease. The endpapers are especially telling and painful. Many families face some of the same effects of memory loss, and do their best to accept its consequences. This honest account is sure to invite discussion concerning family, illness, love and memories. While sadness is at the core of the telling, it is also tender and hopeful. 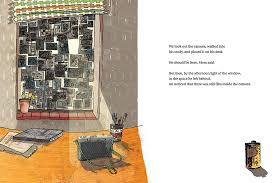