The Secrets of Tutankhamun: Egypt's Boy King and His Incredible Tomb, written by Patricia Cleveland-Peck and illustrated by Isabel Greenberg. Bloomsbury, Raincoast. 2018. $24.99 ages 10 and up 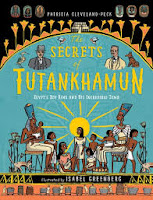 "It is thought that Tutankhamun did not take part in any military campaigns himself, possibly because of his poor health. Despite that, no one was prepared for the sudden shock of his death. Records suggest that he was just 18 or 19 years old when he died, and to this day, no one knows for certain what caused his death. The mystery of Tutankhamun's short life would continue to be studied ... "

You surely know the students who want to read this book. Much has been written about King Tut, the discovery of his tomb, and the fact that he was a 'boy king' when he died. This book provides details about the Egyptian family, officials, and nurses who were part of Tut's story, and also the archaeologists and explorers who played a role in discoveries made of his tomb and the forensic evidence that has helped to piece together a part of his tragic story.

In Part one, the story begins with family, what is known about them and their rule, Tut's early carefree life is shared. But, things do not remain so for him. He is too soon the only remaining member of the royal family, and becomes king at 9. Decisions in his name are made and a marriage arranged. There is no clear evidence to show how he died, or why. Readers will learn the detailed process for mummification and why it was done.

"Ancient Egyptians were not afraid of death, but they wanted life to continue into the
afterlife, so after someone died they rushed to furnish the tomb with everything that
would be needed. But Tutankhamun's death was so sudden that his intended tomb
was not ready. The paintings on the wall were still wet when his tomb was sealed."

Part two describes those who search the tombs of Egypt, the knowledge and skill they gain in a bid to discover Tut's tomb, the discovery in 1922, and all that is there to be found when it was opened.
It is a fascinating find, and each successive chamber adds a new level of understanding to a story that is told in a clear, accessible style.

The third and final part discusses how forensic science has allowed a deeper understanding of what likely happened. There is no definitive evidence leading to a determination for the cause of death.

The illustrations are helpful and often captioned to describe the people and the events of the story. It has the feeling of a graphic novel, and that will certainly appeal to its target audience. There are maps, quotes and letters included to help provide context.

Kids interested in history, and especially Egyptology, will find much here to like. It may even lead them to follow up with some research of their own. This is fascinating stuff.
Posted by Sal's Fiction Addiction at 10:00 AM