The Magician's Secret, written by Zachary Hyman and illustrated by Joe Bluhm. Tundra, Penguin Random House. 2018. $21.99 ages 5 and up 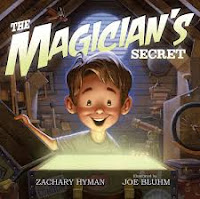 "Grandpa's tales all began at his Magic Story Chest. This was a great big wooden trunk hidden in the darkest, most cobwebby corner of the attic. Each time he told me a story, Grandpa would blow the dust off the old chest, open the heavy lid with a bone-rattling creak and reach in for something special he had picked up ... "

Charlie and his grandfather love to spend time together. Charlie, because he is in awe of his Grandpa's stories and imagination; Grandpa, because he allows his imagination full rein, and is thrilled to share his tales with his beloved grandchild. It's a win-win time for both.

Babysitting is filled with adventure for the two. Grandpa is quite the entertainer. Charlie loves his magic, he is even more intrigued by the tales that begin in the 'Magic Story Chest.' Each tale told is sparked by a personal memento Grandpa has brought back from his travels: an hourglass from King Tut's tomb, a long, white scarf that once belonged to the Red Baron, a coconut shell from a tropical beach. As Grandpa tells his stories, Charlie is enthralled with his many adventures.

While Charlie lives vicariously through those stories he hears day after day, his father is not impressed.

"They're just tall tales, Charlie," he said. "Things Grandpa's made up. He's never been to Egypt or flown a warplane or been chased by a dinosaur. He just imagines all those things."

Of course, Charlie doesn't believe what his father is telling him. He goes to his grandfather who shares his wish that grown-ups would never give up on imagination.

"The imagination is the most powerful force in the world. Magic is all around us, kiddo - in me and in you. All you need to do is believe. You know what I like to say? Whatever you believe, you can achieve!"

Then, he gives Charlie a very special gift.

Zachary Hyman listened to his grandfather's tales of triumph and imagination as a youngster, and his Grandpa's assertion that to be able to see something, you had to believe it. Today, Zach plays in the NHL. Joe Bluhm also listened to his grandfather tell stories about building houses in wartime. He loved listening even though they saw each other rarely. He used those memories of their visits to  help him create the light-filled, expressive , and detailed digital artwork that accompanies Zach's most enjoyable text.