Giraffe Problems, written by Jory John and illustrated by Lane Smith. Random House, 2018. $23.99 ages 4 and up 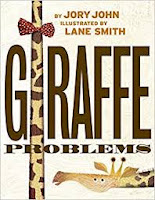 I feel bad about my neck, too. I'm with Nora Ephron on that. It is such an age-defining thing for human beings. But, meh! It is what it is, and I have no control over it. Edward shares my concern. He feels his is too 'necky'. Who can argue with that? Have you seen a giraffe's neck? It is his defining feature, isn't it?

Edward's neck certainly causes others to stare, and Edward is embarrassed by the attention. He compares himself to others, and is envious of those necks that work! Take the zebra ... stripes look great. Or the elephant ... what's not to like about the strength and grace of that neck? There are many necks he would rather have than his own.

His mother assures him that others are jealous of his neck. He is unconvinced. It isn't until Edward meets a turtle that he realizes his mother has been telling him the truth. Poor Cyrus! He feels bad about his neck, too. After watching a banana ripen for seven days, Cyrus is desperate for that banana to fall to the ground, providing sweet nourishment.

Edward is a willing assistant in the quest. Cyrus is ever thankful, and shows it.

"Edward, face it - your neck is impressive.
It allows you to do amazing things.
For instance, you just solved my weeklong
banana dilemma in ten seconds."

Isn't that what friends are for?

Wouldn't your kids at home, or your early years students love to pair read this book? The humorous, yet meaningful text will have everyone giggling.

This companion book to Penguin Problems (2016) is as funny as the first one. Lane Smith uses an earthy palette of green, gold and brown with textured details to engage readers and show all of the emotions felt by both Edward and Cyrus. 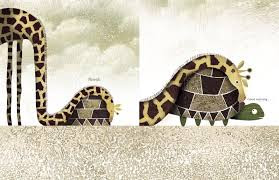