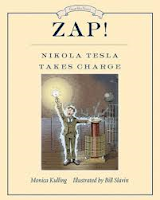 "Nikola Tesla stepped forward and cleared this throat. "Can I help you, mister?" asked Edison, rumpled and frustrated. Tesla gave Edison the letter from his boss in Paris. It began, "My dear Edison, I know two great men and you are one of them. The other is this young man!" Edison sent Tesla to fix the SS Oregon's dynamo. The young man worked all day ... "

In this ninth book from the wonderful Great Idea Series we learn about a man who as a child proved to be quite brilliant. His memory inspired awe in others. By the time he was ten he knew six languages. And, he had dreams. Before reaching his 30th birthday he took an ocean liner from Europe to New York City. All that he had with him by the time he arrived were 'four cents, a book of poems, a drawing of a flying machine, and a letter of introduction to Thomas Edison". It was not an auspicious beginning.

Nor was his meeting with Mr. Edison. The two men were very different and did not share the same scientific beliefs, despite their shared interest in and knowledge of electricity. After being cheated out of a promised payment for work done, Niko left his job with Edison, found a new mentor in George Westinghouse, and a chance to test his personal theory concerning alternating current. Success brought further chances to prove himself; he built the first hydroelectric plant at Niagara Falls, and followed that with many other projects.

This fine series focuses on inventors who are not always well-known to the target audience. Monica Kulling writes with clarity, assuring that her young readers get to know the man who accomplished so much. She explains the difference between direct and alternating current in language that I understand (I sadly lack a single science gene). Tesla had an uphill battle against the popular Edison, and the two would work diligently to each prove the other wrong. The World's Fair in Chicago was the catalyst for 'electrifying' America, thanks to Tesla's more efficient delivery of power.

In front matter, the author includes her sources of inspiration for her writing, a list of websites meant to encourage and inform those wanting to know even more, and a poem about Niko as a child. Bill Slavin created his illustrations with pen and ink on paper that was then digitally colored. His images perfectly match the tone and impact of the text. He proves an adept researcher as his drawings distinctly reveal the historical time period, as well as the main characters themselves.

This is a terrific addition to the series.
Posted by Sal's Fiction Addiction at 9:38 PM