Mama's Nightingale: A Story of Immigration and Separation, written by Edwidge Danticat and illustrated by Leslie Staub. Dial Books for Young Readers, Penguin. 2015. $20.99 ages 4 and up 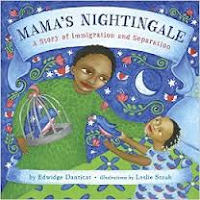 "When I am done, Papa sends what I have written to one of the newspaper reporters he's been  writing to. A few days later, there is a message on our answering machine. The message is from a lady reporter saying that she wants to print my story in the newspaper for everyone to read!"

Sava is full of sadness. She is yearning for her mother, who has been sent away to Sunshine Correctional. She is being held there because she is a woman 'without papers'. Her papa is busy every night writing letters to important people, seeking help to get Mama home to her family.

In weekly visits, the family catches up on all news. Those visits are never long enough, leaving Sava crying when they end, and dreaming of her mother's return. When a cassette arrives in the mail, Sava hears her mother's voice. It contains a song and a story, allowing Sava to imagine that her mother is right there beside her. It helps to ease the pain of separation that the family must endure.

It is only the first of such tapes. Mama sends one each week, sad and happy stories; all meant to remind her young daughter of her abiding love. One night Sava joins her father at the table, sharing her story in writing.  When a reporter asks to publish it, support for the family assures that Mama gets her day in court, and is released. Sava, who knows the power of the stories her mama shared, now realizes that words have tremendous power for bringing about change.

This is a powerfully important story, beautifully told. It is illustrated in oils to emulate Haitian folk art. Its bold colors and emotional images allow readers to feel much of what Sava is herself feeling as the family deals with the longing and sadness that comes with separation.

In an author's note, Ms. Danticat shares her own heartbreak at being separated because her parents, who had emigrated to the United States, didn't have the 'right papers' to send for their children.

"As children in Haiti, my brother and I sometimes played writing games, making up passports, visas and other documents that might one day reunite us with our parents."

She dedicates her book to those children who continue waiting.
Posted by Sal's Fiction Addiction at 10:58 AM