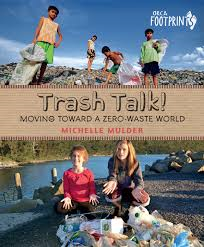 "...But a few decades ago, here in Victoria, BC, my time on the beach would have been very different. From 1908 to 1958, city workers loaded all of Victoria's garbage onto barges and dumped it in the ocean. The tide washed it back to shore, though, and picnickers brought rakes to clear places to sit on the sand!"

A slight blip in the road today; this is not a book of poetry. It is a celebration for Earth Day. Enjoy!

I look forward with great anticipation to each new Orca Footprints edition. They have been beautifully designed, well researched and blessed with terrific writing. This one is no exception.

Michelle Mulder wants her readers to know the many ways in which garbage has become an issue around the world. As well she makes them aware of the inventive ways people are dealing with the trash that we create.

She has designed four chapters to share her research: a history of trash, what happens to our garbage when we sent it to the landfill or throw it in our waters, the organizations and people who are trying to make use of what many deem disposable, and the initiatives that are being developed to help deal with the massive amount of garbage we are producing.

As she has done in previous books, Ms. Mulder writes as if she is having a personal conversation with her audience. She includes personal observations and anecdotes from her travels and from her life in Victoria today to make us cognizant of simple solutions to some of the ways in which we dispose of unwanted and unneeded objects. Some of the information shared is astonishing and almost impossible to imagine. Take the Great Pacific Garbage Patch, located north of Hawaii. The amount of garbage that floats at its centre is six times bigger than the entire United Kingdom, causing the death of one million birds and 100,000 marine animals every single year. How tragic is that ?

Many talented and determined people work endlessly, and with great success, to make a difference.
They find ways to distribute surplus foods, use discarded materials and other recyclables to construct new homes, furniture and even musical instruments. Governments around the world encourage variety in ways to deal with trash, from banning plastic bags to teaching how other people's junk might become treasure for someone. There are many useful suggestions for families wanting to do their part in creating a 'zero waste' world.

The "Trash Facts" are interesting and inspiring. A wealth of impressive color photos, a table of contents, an index and a list of additional books, movies and websites add to the appeal and to the value of this thoughtful new edition.

"Even so, sometimes recycling makes environmentalists nervous. First of all, melting down used materials to make a new product takes a lot of energy. In most places, the factories that recycle our waste use electricity made with coal. Coal is a fossil fuel, and burning it releases harmful gases that contribute to global warming. Also, many materials- like plastic- can only be recycled a few times. Each time, the product becomes more flimsy and more likely to wind up as garbage eventually. Second, much like burning garbage, recycling often makes people feel better about using something once and tossing it away. But the best thing for the environment is to throw away less in the first place."

Once again, she gives us pause to think and to change our ways.
Posted by Sal's Fiction Addiction at 11:06 AM