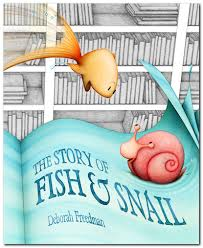 Well, Fish, if
you think I am
so blah,
and your new
book is so
wow,
then maybe you
would rather live
there...with NO SNAIL."

You've heard similar words between friends, haven't you? If you work or have worked in a school, or have children of your own, I know that you have. Too often, the results are just what happens with Fish and Snail. Both angry, they make a choice that is sure to hurt their hearts.

In the days before their falling out, Snail can't wait for Fish to return home to read their book. Fish is an adventure seeker; one day, he comes home with news of a newfound book and he wants Snail to see the book, rather than just tell him its story. Snail is apprehensive. He likes things the way they are. He likes their book, and doesn't really want to venture beyond its safe pages. PIRATES scare him! He likes kittens.

Fish is mad and brings an end to their story. Poor Snail...he is so sad. He doesn't like this ending. When he leans over the edge to get a glimpse of Fish in his new watery world, he knows that life will not be the same without his best friend. He takes a leap of faith.

I like this story-within-a-story format, and I think her readers will be captivated by Ms. Freedman's ability to create two such opposite creatures who are really the best of friends, for the most part. The watercolor art is wondrous! 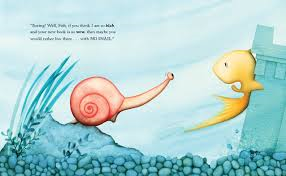 Posted by Sal's Fiction Addiction at 11:46 AM