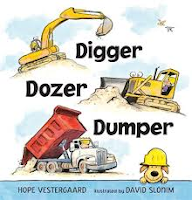 "Bulldozer
The bulldozer isn't sleepy.
He's always in a rush.
He pushes piles of dirt and junk,
and levels trees and brush.
He's not a bully, either,
although he's big and tough.
He waits his turn, plays well
with friends,
and pushes just enough."

Oh! I know that Joey is going to love this book, and any other little one who wants to know about all the big machines and trucks they see working on the streets, or at construction sites. Can you remember how much fun it was to stand and watch the action, admiring the work at hand and amazed by the power of the machines used to get the job done?

As we turn from the title page to begin our adventure, we can see that there are others here before us. Three young friends, obviously filled with admiration, look and point and touch the trucks as they are getting ready for their day's work. Turn another page and we begin to make a close association with them. The young lady and her dog are in charge of the street sweeper as it begins its early morning rounds, clearing dirt and grime from the city's streets. The two boys takes their places when their help is needed. On we go, until we have met all 16 big machines and trucks and learn something about the work they do.

Fun to read and explore with little ones, this book is destined to become a fan favorite. Adults will enjoy it as much as their kid counterparts, as it also describes the mechanics that allow for the machine's performance:

"The dump truck doesn't dump his dirt
just anywhere -
he's precise.
He slowly lifts his giant bed
and checks his target twice.
CRASH! BANG! CLANGETY CLANG!
The gravel starts to spill -
a mighty swoosh, and just like that,
he pours a little hill."

I love the bright colors in David Slonim's acrylic and charcoal artwork. Each machine has eyes that express its feelings, and they are sure to draw attention from the intended audience. The children are keen workers, giving it their all to ensure that the work meant to be done is completed. The floppy-eared dog accompanies them as they work. He must be a big help!