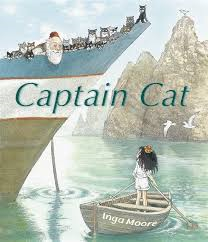 "Which meant that, although he wasn't lost exactly, Captain Cat now sailed on an unknown sea. And he was just beginning to wonder if he would reach the edge of the world when all at once he came instead to a remote and lonely island. "Hooray!" cried the Queen of the island when she saw she had a visitor."

There is no doubt that he loves cats! His ship is rife with them, and his nickname is Captain Cat, after all. He also loves the sea. His days are filled with wonder, and cats. How did he come to have so many, you ask? Well, it's a long story and a bit strange:

When he tired of trading, he sets sails for those places he had never visited. He might not have another chance! He heads off in a different direction, not knowing that a savage storm will soon send him miles off course. He has no idea where he is now. As luck would have it, he soon finds himself nearing a 'remote and lonely island'.

A young and excited Queen is quick to welcome him to her home. She is enamored of his feline companions, having never set eyes on such engaging creatures. She invites the Captain, his crew, and his cats to join her for lunch at the palace. As soon as the soup is served, the tables are overrun by RATS! The young queen is frantic. The visiting cats are quick to solve that problem.

Untold treasure is offered if the cats can stay to get rid of the rats that run rampant all over  the island. The decision is left to the cats:

Thus, the captain leaves them in the Queen's care and sets his path for further adventure; but, he soon misses his cats and heads for his home port. When he tells his fellow traders about the many riches he has acquired in trade, they are off. Surprise twists will keep young readers keen to know what might happen next.

Inga Moore has created a watery world in mixed media illustrations that will charm and delight all who share this marine adventure. They evoke loneliness, fear, warmth and humor...all very important to the events of this well-told tale. 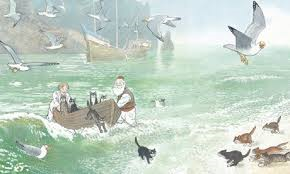