Alex the Parrot, written by Stephanie Spinner and illustrated by Meilo So. Alfred A. Knopf, Random House. 2012. $20.99 ages 8 and up 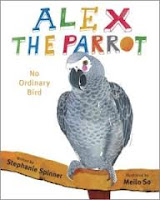 "Alex and Irene got off to a bumpy start. Alex was frightened and unhappy in his new home in the biology lab. He wouldn't eat or come out of his cage. Slowly, patiently, Irene helped him to overcome his fear. Within a few days, he was walking in and out of his cage and perching comfortably on her arm."

You don't have to be a bird lover to engage with this story of Alex, a gray parrot who caught the world's attention when he showed us over a period of thirty years how much one bird could learn. I am always on the lookout for additions to my ever-growing list of picture book biographies. I love to find books about animals because I know how children connect to them in amazing ways.

So, here's the latest addition. It has its opening when Irene Pepperberg buys an African gray parrot from a pet store. She is a graduate student in biology at Purdue University and has an abiding interest in learning about animal communication, avian in particular. She and Alex spend thirty years learning together. The author helps her young audience (and those adults who will find this book fascinating) see the process that Irene used to teach and test Alex.

Alex was an extraordinary bird with a bigger-than-life personality. Because of the work the two did together, we have learned so much more about his species:

"We know now that African gray parrots are among the very smartest. They are also among the most vocal. They squawk, they sing, and they love to imitate noises they hear. They can sound like just about anything. They can also speak as clearly as people - which made an African gray parrot the perfect bird for Irene to study."

The story is told with great respect and love for this formidable bird. There were times when I laughed out loud:

"Alex made it very clear that he liked to be obeyed. If he asked for grape and got a banana, somebody was going to get a banana facial. It wasn't long before "no" became one of Alex's favorite words, too."

Can't you just hear the giggles? There will also be words of wonder as they learn the many things that Alex was able to learn under Irene's quiet and patient tutelage.  I like that the author also considers animals in the wild and what they learn through imitation, and other scientists who were studying animal communication at the same time. It was a new field and opened the eyes of many who had previously believed that only humans were capable of speech and understanding.

Alex was king of the hill until 1995 when Irene got Griffin, another gray parrot, to train. Alex was not pleased at the intrusion and make it perfectly clear that he was the 'boss'. They did learn to live in peace. Alex's untimely death of heart failure in 2007 was a shock to Irene, her staff and the many people around the world who knew his story. He had taught us a lot. There may be another gray who will be able to do what Alex did...but maybe not, and he was the first.

I have nothing but admiration for Meilo So's incredible body of work. I buy every book she illustrates, knowing that she has much to add to the stories being told. It is the same with Alex's tale. She uses a mix of media - color ink, watercolor, gouache and colored pencils - to show us Alex in action. His buoyant love of life and his joy in learning is evident in her bright and lively art, set on white space throughout the text and complimentary to it, as she makes Alex come alive for readers.
Posted by Sal's Fiction Addiction at 11:34 AM