A Sky-Blue Bench, written by Bahram Rahman and illustrated by Peggy Collins. Pajama Press, 2021. $22.95 ages 5 and up 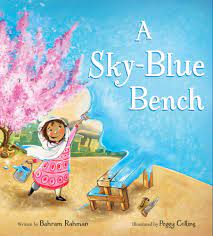 "When Aria arrived at her classroom,
the other girls were already seated on
the blue tarp that covered the floor. The
teacher pointed her to the back row
where she could lean against the wall.
Aria walked slowly, her face burning
as she felt everyone's eyes on her
helper-leg."

The world has heard much about the unexploded weapons that were hidden during armed conflicts in world communities. Aria is one of the Afghan children whose life was forever changed when she stepped on one of those devastating weapons.

It is her first day back at school after a long recuperation. She is conscious of her 'helper-leg' as she approaches the other girls and the school itself. Aria knows there are no longer any benches at school. She also knows she cannot sit on the floor for a full day; it will hurt too much. She tries many different ways to keep herself comfortable. None work.

Worrying about returning to the discomfort that school has become, Aria does not sleep well. Early morning brings a plausible solution; she will build her own bench! It takes planning, persistence, and a little help from a skilled carpenter, Kaka Najar. He gives advice, loans necessary tools, and offers a free gift of blue paint. It is all Aria needs.

"Sky-blue is for courage, peace and wisdom."

Peggy Collins fills her spreads and endpapers (front and back) with digital artwork that reveals the emotions felt, the support of community, and the determination of a child to make a difference for herself and others as Aria navigates a new normal following such an overwhelming event in her life. An author's note shares his experiences growing up in Afghanistan, and writes this story to honor those whose lives have been impacted by land mines and UXO. 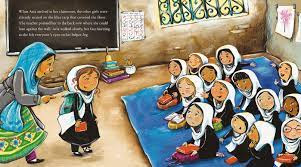