"Estlin looked around
as if his eyes were on tiptoes
and when his heart jumped,
he said another poem.

"On the chair is sitting
Daddy with his book.
Took it from the bookcase
Beaming in his look."

In another exceptional picture book biography we learn about E. E. Cummings. While I certainly know much of his poetry, I had no idea about his life. After reading this informative and appealing book, I have a much greater understanding for his work.

Edward Estlin Cummings was born in the late nineteenth century into a household that included his parents, his sister, his grandparents, two aunts, an uncle, a maid, a handyman and sundry pets. It was a happy and encouraging place to be. In fact, E.E. spoke his first poetry at three; his mother wrote down everything he said in a book she called 'Estlin's Original Poems'.  He enjoyed art; but, his passion was words. He liked to create his own or use familiar words and put them together to make new ones.

Because this book deals mostly with his young life, the intended audience will find much to appreciate about his approach to writing. He worked very hard to be good at it, often spending contemplative time in the outdoors where he could carefully consider that world. Imagination led to artwork that showed his love for elephants, trees, birds - but, words were his forte. With lasting encouragement from his family and teachers, he explored the power of words.

"Estlin knew it would
take courage to follow his heart,
but he was determined
to live the life he imagined."

After college he moved to New York, a city filled with inspiration for a young poet. His service in WWI ended with his return home, and the publication of his first books. They were not well received. Here was someone who was writing in a way that no one else was; it was inspirational and alarming to critics. He became E. E, changing the face of poetry and experimenting with form and lettering.

He would let nothing deter him - his poetry was true to his vision and to 'saying YES'.

Back matter includes a chronology of his life and work, a set of his poems, and a very informative author's note.

Kris Di Giacomo fills the pages with the most inventive artwork. Letters and words dance across the textured spreads. Using mixed media and collage, she plays with words as Mr. Cummings did. There is so much to love and admire about the early life he lead. That is captured clearly in scenes of imaginary play, the idyllic surroundings he called home, and the constant, uplifting support that was essential to his success.

"it takes
COURAGE
to GROW up
& become WHO
you REALLY are." 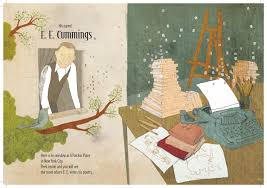 Posted by Sal's Fiction Addiction at 4:38 AM