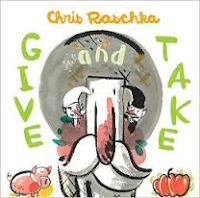 "On the way the farmer
stopped at the house of his
neighbor, who grew pumpkins.
"Hello, old man," said the
neighbor. "Hello, old woman,"
said the farmer.
"Would you like some
pumpkins?" she said.

In a modern take on the folk tale tradition, Chris Raschka encourages contemplation of the concepts of 'taking' and 'giving'.
It will be interesting to listen in on the conversation that follows sharing it with its intended audience. I would like to be a fly on the wall as young readers allow a look at its impact on their thinking.

On the first day, an apple farmer meets an odd little man in his orchards as he inspects his apples for readiness. The elflike man is called Take and that is what he connives to have the farmer do -take everything he can! He promises a fine life. The farmer argues that his life is already fine; he allows himself to be talked into taking pumpkins from his neighbor - all of them! That is, however, not all he takes. Though weary when he arrives home, he uses the pumpkins to make soup which neither he nor his dog like. What he wants is an apple.

After putting the boots to Take the following day, he returns to his orchard to harvest his fruit. There, he meets another odd man, called Give. Give promises a sweet life. The farmer is content with his life; again, he takes advice from Give. When he visits the pig farmer who is also his neighbor, he is encouraged to give all of his apples for the pigs. That is not, however, all he gives. This time when he arrives home tired and hungry, he has nothing to eat. Give gets the boot the next morning.

While picking more apples, he hears Give and Take in an argument about who is right. Their altercation has the farmer thinking much more clearly. His solution to the problem created by taking unwanted advice is sure to rally quiet discussion.

Mr. Raschka uses his signature black outlines, and free flowing images to help tell his story. I love the farmer's red nose, his use of the color red throughout to draw our eyes to the importance of certain images, the abundance of produce, and the clever details used to keep readers engaged throughout the telling.

It makes me wonder again ... when is enough enough? 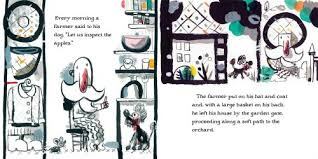 Inventive as ever.
Posted by Sal's Fiction Addiction at 12:29 AM