Even More Lesser Spotted Animals: More Brilliant Beasts You Never Knew You Needed to Know About, by Martin Brown. David Fickling Books, Schollastic. 2019. $25.99 ages 9 and up 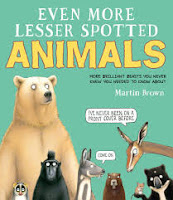 "The maned wolf's nickname is
the fox-on-stilts. But it's not a fox.
It's not even a wolf. Nor is it that
closely related to either foxes of
wolves. Just look at it. It's taller
than the biggest true wolf yet less
half its weight. And it doesn't hunt
in big moose-chasing packs like
wolves either. It hunts alone. Those
lanky legs are for stalking silently
through the long grass ... "

Following up on Lesser Spotted Animals (2017), Martin Brown lets his audience know that there are many additional animals who need our attention. They are rarely seen and even more rarely discussed in books for children. He is going to help to remedy that with this book about 26 new 'lesser spotted' animals. He voices a complaint in his introduction:

"Take those big-name, bigwig, big cats for example. Lions fill our picture books. Tigers are always on TV. Jaguars have become cars and Pumas are shoes. They're all over the place! Just like their famous big-name animal friends. So much so that when we think of animals we thing of the BIG names - and only the big names."

His mission is to ensure that we begin to pay attention to many other animals needing our attention. It's pretty tough to save them if we know nothing about them. His new expertly designed book is meant to give readers all they need to know about each animal on a double-page spread that provides  pertinent information, as well as a charming image of the animal itself on the facing page. Information includes a few paragraphs of witty description accompanied by useful thumbnail sketches, and an information box with five descriptors: size, what they eat, where they live, status, and ...

The text is humorous and conversational, giving middle grade readers a chance to learn about animals they have likely never encountered. Animal commentary through the use of dialogue balloons ups the appeal. I like that size comparisons are provided to give perspective. A table of contents and glossary are provided. Although its tone is upbeat, it reminds readers that many animals of the world are in great danger of extinction. Fascinating, coherent and worthy of classroom discussion.

Are you ready to learn something new? You would do well to begin with this fine book.

"Slender lorises generally hunt alone, but, when the sun rises, they retreat to their favourite thicket of branches, high in a tree, to cuddle up with as many as seven others in a tangle of arms and legs called a “sleeping ball”. All safe and sound." 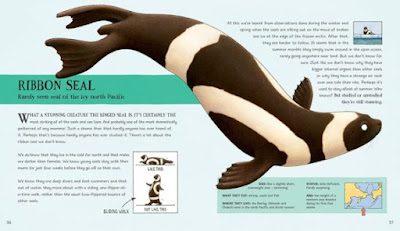