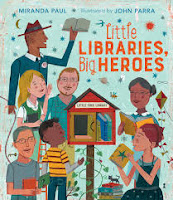 "In school, he didn't feel
heroic. Even though his
mother had been a teacher
who loved books, reading
was difficult for him. He was
often scolded for asking too
many questions, and was
told that he wasn't a good
student.
Todd's mom disagreed. She
told him he was gifted ... "

I love driving by a neighborhood school and seeing its Little Free Library near the entrance. It gives me such a good feeling knowing it is there. My friend Cathie, who is the school's librarian, posted a photo just before school started in September of a child sitting on the step beside it, quietly reading. What joy she must have felt to recognize again its true worth!

This book honors the men who co-founded the Little Free Library, Todd Bol and Rick Brooks. Todd placed the first one in his front yard in honor of his mother, a teacher who loved books and gave Todd the confidence to 'do anything' he wanted to do.

When his neighbors discovered his little free library, they were inspired to borrow books, to talk about them, to add their own books while borrowing from it. Seeing that his own box of books inspired others, he turned to his friend, Rick. Rick was full of ideas and confidence that the two could grow a business using the idea. The plan fizzled when no one bought them.

Determined to make a difference, they found another way ... they would not wait for people to come to them, they would take their libraries to the people. And, a movement was born!

"It was working!
The seeds of Todd and Rick's idea were beginning
to grow. A radio interview spread the word about
the little free libraries all around Wisconsin. Then
a national TV show featured their idea. The whole
country seemed to be buzzing about the tiny,
anything-but-ordinary libraries."

Community heroes took up their cause. The idea spread, and continues to spread throughout the world. Stories are included of many places where these libraries are flourishing.

"Stewards placed Little Free Libraries at a hospital in
Ireland, on a street corner in Pakistan, outside a house in
South Korea, and near a schoolyard in South Sudan."

An author's note speaks of her research. Added information includes More About Little Free Libraries and More About the People and Events in This Book. Finally, there is a chance To Learn More through a list of books and a website: www.littlefreelibrary.org

Finally, the good news! There are now over 73,000 registered LFLs around the world! Will you add to that number? 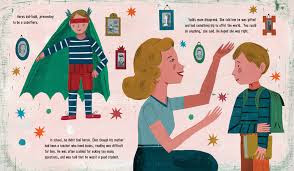