Ojiichan's Gift, written by Chieri Uegaki and illustrated by Genevieve Simms. Kids Can Press, 2019. $18.99 ages 5 and up 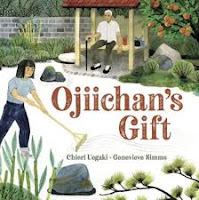 "There were no tulips or
daffodils or daisies; no
carrots, cabbage or peas.

Ojiichan had made a
garden out of stones -
big ones, little ones and
ones in between. Some
reminded Mayumi of
turtles. Others stood like
mountains, rugged and
tall."

Summer visits to Japan meant working on her grandfather's garden - helping him care for it by weeding, pruning, and watching him as he worked. The best part for Mayumi was raking the gravel, and making patterns that she and her grandfather could sit and savor. Once home, she missed the peace and contentment she felt while sitting there with him. Mayumi kept a small box filled with souvenirs from her visits, and used them to help her remember until she returned the following summer.

As happens, one summer things had changed. Her grandfather was no longer able to care for himself, his home, or his garden. Sad and angry that her beloved grandfather could not do what he loved to do, Mayumi did her best to move the large rock at the center of his garden. It would not budge. Even angrier, she kicked gravel around until one rock hit her. As she let go of her anger, Mayumi began tending to the raking once again. As she worked, an idea formed.

She could not have presented a more important gift to her grandfather. He is delighted with it.

Watercolor illustrations work their own magic for this story. The warmth of the relationship between the two is captured in patterns, growth, and shared experiences. The love shown is as gentle and peaceful as the garden they worked so hard and happily on together.

If you are building a collection of books to celebrate Grandparents Day when school resumes in the fall, this book would make a fine addition to it.
Posted by Sal's Fiction Addiction at 10:00 AM