TEK: The Modern Cave Boy, written and illustrated by Patrick McDonnell. Little, Brown and Company, Hachette. 2016. $20.99 ages 4 and up 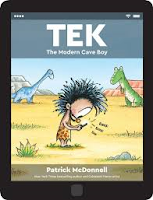 "All cave boys lived in
caves, of course. But the
problem with this cave
boy was that he never
wanted to leave his. Even
when friends came to
visit. In the evening, an
eerie glow came from
Tek's cave, making it
impossible to see the
twinkling stars above."

I'm not sure if this book about the dangers of the technology that seems to surround us is meant for  adults like me who often rail against our dependence on it, and the focus that we give to it in our daily lives, or for our kids.

Tek is a caveboy and quite the modern guy. He lives in a tiny igloo-like cave and most everything about him (except perhaps his beard) will be familiar to any children who have read other stories of Neanderthal people. Tek is happiest within cave walls, and never makes his way outside to spend time with friends.

"Tek stayed alone in his cave room,
glued to his phone, his tablet,
and the game box, all day, all night,
all the time."

He is oblivious to the outside world, and his parents are concerned. Matters not to Tek, even though he does miss a lot. He is uninterested in anything beyond his technology and his cave walls. Then, Big Poppa, the village volcano 'shakes things up'. Tek and his technology crash, and the boy learns a great deal more than he ever thought he might. Lesson learned.

I love that Little, Brown and Company put some publishing 'chops' into designing a book that cleverly resembles the iPad! Its size and look are dead on; it has signal bars, a home button, the need to input a password before entering ... read diagonally from top left to bottom right. The battery life indicator shows how quickly it is used up, and the WiFi signal shows no power following the eruption.

This is fun!
Posted by Sal's Fiction Addiction at 10:30 AM