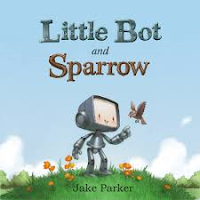 "Sparrow had never seen
a robot before.

... until she realized that
the robot just needed to
be taken under her wing."

This was Sicily's favorite book while she was here this past August. She carried it with her everywhere she went; it was one of the books she wanted read every night before bed; and, she is looking forward to seeing it again next week. That is staying power for a book loved by a two-year-old who has many books read to her each and every day.

Quite the winsome tale of a discarded robot and the tiny sparrow with enough insight to recognize Little Bot needs a friend. She patiently watches as he makes his lonely way in the world, not really understanding the many discoveries he is making. That is when she decides to 'take him under her wing' and show him the way .

"She led him to the
forest, introduced him
to her friends,
and taught him why robots shouldn't fly."

He has a lot to learn. Learn he does. One thing he has no schema for is the coming of winter. Sparrow warns that she will soon be gone. Sadness grows in Bot`s heart. When the day comes, he watches her journey away from him. Winter is a lonely time. As he wanders, Bot remembers all that Sparrow has taught him - and he remembers their conversation about dreams, another concept he could not fathom.

Turns out that he just needs the right circumstance.

Tender and charming, it is no wonder that we are both looking to sharing it again next week. 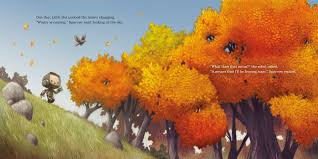