A Year of Borrowed Men, written by Michelle Barker and illustrated by Renne Benoit. Pajama Press, 2015. $21.95 ages 7 and up 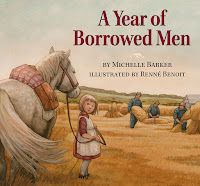 "Every day the borrowed men went out to the fields to help run the horse plow or milk the cows. It was my job to bring them lunch. Mummy would pack up one of our horses, and I would lead her out toward the fields. The horse always knew where the men were."

This is a book that has been on my shelf for far too long. Today, I will remedy that by telling you about it. It is a story of Germany at the end of World War II. Based on her mother's memories of that time in her life, Michelle Barker chooses to tell it in clear, understated prose.

Gerda and her family 'borrow' three French prisoners to help them with keeping their farm productive. They will only stay until the war ends. They are there because the German army has 'borrowed' her Papi to help fight the war.

"We had cows, pigs, 150 chickens, and six horses to pull carriages and help with the work in the field. We were lucky compared to others in our German village. We had milk and butter, meat, eggs, and produce to sell to people in the nearby city. But it was a lot to take care of."

They are tasked to treat the three men as the enemy. The family cannot do that. Rather, they treat them with respect and kindness, thankful for their help. They sleep in the pig kitchen where they are warm and well-fed. The one time they are invited inside the farm home, someone reports them. Mummy is taken to the village and warned by local police that another such invitation will lead to her own imprisonment. They are scary times. At war's end, the men return to their homeland, free at last. They leave knowing they have made some very special friends.

A young narrator's voice lessens the horror that surrounds the family in wartime. This story of kindness, friendship, and a loving family is illustrated realistically with watercolor, colored pencils, and pastel to evoke the warmth of the situation at a time when there was little hope for many. The addition of family photos and an author's note add clarity.

This is a story to be shared at any time of year. It would also work well at a Remembrance Day Service (sorry I missed telling you about it a bit earlier) or at Christmas, a time of giving and for being kind and thankful.
Posted by Sal's Fiction Addiction at 9:44 AM