The Artist and Me, written by Shane Peacock and illustrated by Sophie Casson. Owlkids, 2016. $18.95 ages 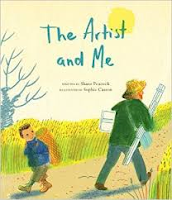 "But I kept being mean to him. In crowds, of course, since that is what cowards do. "There goes the fool," adults would say. "A useless fool," I'd laugh with them. There was proof that we were right. No one ever bought his art. He was very poor. That was not to be admired. We called him horrible names. We threw things at him."

Written as a journal and memoir by the narrator of this very special story, we soon become aware that he is none too pleased with his behavior as a child in Arles, France where Vincent Van Gogh spent some time painting. Van Gogh was seen as a penniless artist, and 'crazy' person by the townspeople. They often made fun of him ... not to mention the children (our narrator was one of them). Looking back, he remembers those days and his posturing as part of the crowd, while also being drawn to the artist and his work.

Van Gogh had no real interest in making a living as an artist. He was consumed with the need to tell the truth in his work. That concern for the truth helped to protect Van Gogh, as he was often able to completely ignore the way he was being treated. Perhaps, not all the time. There are two scenes that show the young boy's keen interest in the art being created ... each is a poignant moment. The final one takes place in a wheat field; the child is able to see the power that the image holds and how the artist's interpretation of the scene is quite remarkable.

As an adult, he realizes the mistake he made in not accepting a gift proffered when the artist turned to find him watching. Instead, he ran away in terror. Of course, that child knows nothing of the fame and admiration Van Gogh's work will eventually generate. It is when he takes his grandson to visit an art exhibit that he sees the 'priceless painting'. Full of regret for the past, he ends his journal with a caption for the photograph of their visit to the exhibit.

"I don't laugh at him anymore."

Sophie Casson ably matches the powerful, telling text with sensitive and quite remarkable images. They are vibrant and colorful, staying true to the famous artist's work. Backmatter includes a note about Van Gogh himself, an author's note and a source list.
Posted by Sal's Fiction Addiction at 10:44 PM