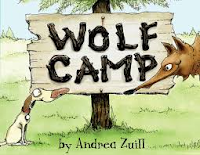 "Often I've wondered what
it would be like to live as a
real wolf.
Then one day I got a surprise.

WOLF CAMP
Have you ever felt like
howling at the moon?"

All Homer can think about doing is attending WOLF CAMP. I mean, what self-respecting dog wouldn't want to live like a wolf for a whole seven days? He nags and nags to be allowed to attend, and have his dream come true.

Given the OK, he is off! His first introductions are to Fang and Grrr, beasty counsellors in the art of being wolfish. Homer takes in all instructions, meets some new pals, Rex and Pixie. Together, they make up a pack and do their learning: howling, hunting, and sleeping in the great outdoors. There are some normal camp issues regarding food quality and the bugs that plague him; still, Homer is reluctant to say goodbye when the week comes to an end. Of course, returning home has its rewards - a comfy bed, a warm blanket. Being made an honorary wolf, with a certificate of authenticity and an accompanying realistic howl, makes the week worthwhile.

Kids are going to hoot as they pore over the watercolor illustrations that give expression and life to these canine characters. My favorite double page spread shows the three campers raptly listening to Fang's long-winded diatribe on safety issues. It goes on until it literally fades off the page. Funny! From chasing a squirrel together to gaining enough confidence for Pixie to think she can 'take' a moose, it's laugh out loud hijinks. Might even occasion a softer feeling for those wolves that seem  destined to terrorize us.

Posted by Sal's Fiction Addiction at 11:30 AM