Lost in NYC: A Subway Adventure. Written by Nadia Spiegelman and illustrated by Sergio Garcia Sanchez. A TOON Graphic, Publishers Group Canada. 2015. $23.95 ages 7 and up 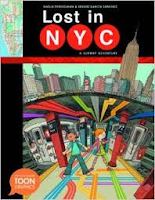 "So, today we are going to the
EMPIRE STATE BUILDING,
and we'll be learning a bit about
the subway along the way.
What are YOUR favorite trains?

Pablo and his family have made many moves; he has already attended five previous schools. When he arrives at his newest, he just wants his parents to drop him and be on their way. On his first day there, he discovers that he and his classmates are taking a field trip to the Empire State Building. Some start!

After a class discussion of the subway system, they are on their way. Pablo's previous changes in schools have left him wanting to make no real connections since he is likely to be leaving anyway. So, Alicia's attempts to be befriend him are met with some hesitation. However, when the two become separated from the rest of the class, Pablo tries to accept her help. With his resistance and her persistence, they are soon squabbling over what they should do.

His self-assurance soon finds Pablo alone, and trying to navigate the underground subway system to get himself to the class destination. The trip is some introduction to his new school, his new environs and perhaps a new friend.

The story is straightforward, as well as being a teacher's nightmare. Adults and young readers are sure to respond in markedly different ways to the trip. What child wouldn't love the adventure that awaits when separated from the group? It's a chance to prove oneself when facing down the butterflies felt for being on your own in a new place. It takes ingenuity and courage to be successful ... which Pablo thankfully is.

The art is what lifts the book to an even higher level. Sergio Garcia Sanchez amazes with his architectural details of the city from above the ground, and from the underground transportation system that is an iconic part of a New Yorker's life. The crowds, the ever-present signs, the map of the field trip itself, and the feeling that is evoked for anyone visiting the Big Apple are accurately  detailed and unmistakable. The cutaways add another dimension, as do the many perspective changes. We are not done there. The author and illustrator also include information concerning the construction and history of the subway systems, archival photos, and endpaper maps of both the underground and aboveground trips.

End matter includes 6 pages of details concerning subway history, more photos, and a list for further reading, including online resources. Don't miss the story of Sergio and the cop on his first day in New York. It will send you right back to reading it all over again ... and upping the joy for having such an incredible book in your hands. 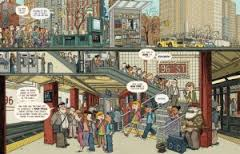