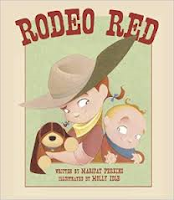 "I'd come home to find
my belongings all in a
jumble, my spurs missing,
or grape jelly smeared on
my favorite hat. I tried
reasoning with Slim. I
showed him the border
between his camp and
mine. But that scallywag
talked nothing but
gibberish."

Rodeo Red is a cowgirl through and through: from the tip of her hatted head to her pointy-toe boots. She and her hound dog Rusty live a charmed life, until Slim ...

Red and Rusty have been together since infancy. They have grown up and learned roping and riding in each other's company. When her tiny brother Slim arrives, things change for the older two. Red is not impressed from their first meeting:

"The first time our eyes met, I knew Slim was trouble.
He looked as slippery as a snake's belly in a mudslide."

He hollers and causes poor Rusty to seek help from Red in protecting his sensitive ears. Red's folks (the Sheriff and her Deputy) cannot get enough of him! Red tries, advises, watches over, and finally gives up completely. She cannot stem his mischief-making. So, she gathers up Rusty and all of her farm animals and heads for the hills.

When Rusty turns up missing, you know who is the lead suspect, don't you? Red is 'ready' to have it out with Slim. Finding Slim asleep with Rusty in his arms does nothing to deter the intrepid investigator. She wants her dog. Slim's howling and the Deputy's impatience sends Red off to conjure up other ways of recapturing Rusty. Time out for guess who!!!

A late birthday gift from her Aunt Sal gives Red the perfect ploy for getting her best friend back. But, she is cautious in offering the new toy up for the old. It's enough to make Slim green with envy and vibrant with want.

"But the sight of that dolled-up dandy was
finally too much for him. He handed over
Rusty like he was a hot coal at a barbecue."
Problem solved!

Great fun to share so long as you are prepared to use your best western drawl, and make the telling as funny and engaging as the writer gives you encouragement to do. Kids will chuckle at the descriptions shared by a reluctant older sister in the wake of her baby brother's arrival and subsequent upheaval for the household.

The muted pastel palette chosen by Molly Idle to create her visual interpretation of the story is perfect. So many fine details give readers a chance to pause and ponder. They may even see themselves in some of the threats and efforts made to bring the younger one into line. 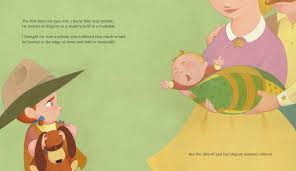