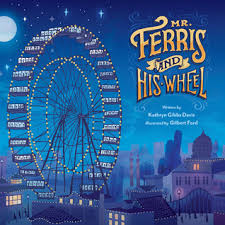 "The judges could not
decide. Fall turned to
winter as they dilly-dallied.
In only four months the fair
would open, and it still had
no star attraction. Finally,
desperate, they agreed to
give George's far-fetched
idea a try. But they would
not give him one penny
for the materials to build it."

I loved to ride the Ferris wheel when I was young. Every July, when the fair came to town, my friend and I would race over to the fairgrounds, and spend all the money we had saved throughout the year in one fun week. I never wondered who had designed the first one. I wasn't even aware that it was deserving of a capital F.

Now, our Ferris wheel was pretty low-key until the year we got a double one! Still, they had nothing on the Ferris wheel constructed for the 1893 Chicago World's Fair. It all happened as a result of what had been unveiled in Paris in 1889 - the Eiffel Tower. Not wanting to be outdone by the French, a nationwide design contest was announced for engineering feats that would be even more spectacular than Paris' tower.

A huge number of entries were received: one among them came from George Washington Gale Ferris Jr., a mechanical engineer. Having already designed bridges, tunnels and roads throughout the United States, he now wanted to amaze every person who walked through the gates in Chicago. It was very difficult to convince anyone that his idea was feasible. When they could not come up with another plan that might work, they agreed to the Ferris wheel idea. They did not, however, provide one penny of financial support. Mr. Ferris set about finding his own backers. Construction could now begin. After many setbacks and a few very dangerous attempts to get 'the footings' in place, they succeeded. It took countless hours, extremely hard work and a lot of worry before Mr. Ferris' endless optimism saw it rise into place:

"And there stood a perfect, enormous circle:
834 feet in circumference, rising 265 feet above
the ground, and designed to move with the precision
of the smallest watch. It looked exactly how
George had first imagined it back as a boy on his
ranch in Nevada."

Testing it came next, and not without a great deal of trepidation. When George and his wife took the inaugural trip in Car Number One, people were astounded:

"George blew the golden whistle.
Two thousand tons of steel began to turn
around as the soft clanking of a large
chain drove the mighty machine.
Up, up, up the car quietly floated
above the mud and noise."

It was a successful ride, and soon became the best fifty cents people could spend when they visited the Chicago World's Fair. More than a million and a half people rode it while it operated. It did exactly what George Ferris had dreamed it would do! It made its final trip on October 26, 1893...the precursor to those rides still enjoyed by many today around the world.

Readers will very much enjoy this well told story. Sidebars add relevance. The artwork is done in digital mixed media using ink and watercolor, and bring readers to a time and place very different from today. Quote sources, a bibliography, and a list of websites will add interest for those wanting to know more than Ms. Davis and Mr. Ford have provided in this welcome and wonderful piece of historical fiction.

Quite the accomplishment; then for George Ferris and his team, and now for this fine collaborative literary team! 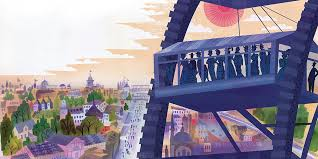