A Brush Full of Color: The World of Ted Harrison, by Margriet Ruurs and Katherine Gibson. Pajama Press, 2014. $22.95 all ages 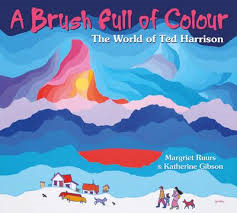 "Ted's father liked to sketch and draw in the evenings after work. When Ted was only two, his father gave him a pencil and paper. "Draw!" he said. "I'm sure you will like it as much as I do." He showed his son how lines on paper could make trees, a house, or a hill."

The table of contents for this lovely new book from Pajama Press entices with the promise of a foreword by the artist himself, and then goes on to let the reader know that soon they will learn about Ted's childhood, his world travels, his life in the north, and his life as a full-time artist. I couldn't wait to get started as I have been in awe of his work for many years.

He has some advice for all artists:

"I urge you to keep on reading, writing and painting. Develop your own style and keep it honest and true to who you are. Find inspiration in the world around you, and you will make the world a happier and more creative place."

Calling his work 'the School of Cheery', Ted Harrison's need to paint has ensured his place as a recognized and respected internationally known artist. He was born in County Durham, England. A happy early life encouraged education and travel, and being true to himself. He enlisted in the military as soon as he could. Following the war, with special intelligence training, Ted began military assignments in India, Egypt, and Kenya. All of those places provided inspiration for his art, and he happily filled his sketchbooks with what he was seeing. Those world travels led to a sense of determination about the art he would make:

"And he vowed that his paintings would show only positive images. "There's enough sadness and misery in the world without hanging it on our walls.""

After military service, he worked as an art teacher and was again off to far lands...Malaysia, then New Zealand and back to England to be, with his new family, near his father and sister. Fortuitously for us, his next move was to Canada's North. The children he taught there, and the surroundings he found so beautiful led to a signature style that is recognized worldwide.

The bright colors and the dancing lights of the northern skies gave him the inspiration he needed to let his imagination grow and flourish. His family's life in the Yukon, and the place itself, is depicted in the many wonderful pieces of art that are included in this welcome and inspiring book. His legacy lives on in the books he has written, in his paintings that hang in galleries, and public and personal collections, and in his wisdom shared about the need for art in schools, and in our lives:

"Art must be part of every child's education," Ted Harrison says.
"Painting is the last great freedom. You can paint what you like."

We could not agree more, Mr. Harrison!

An index is included, as is a page of sources and resources.

Posted by Sal's Fiction Addiction at 10:53 AM