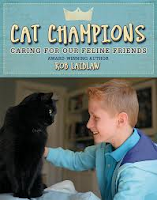 "Twelve-year-old Aundrea Hirschmiller's main hobby is rescuing cats. After more than eight years of volunteering, she can no longer count the number of cats she has rescued. Aundrea works with a group called East County Animal Rescue in El Cajon, California. The group traps cats, spaying the females and neutering the males."

Have you seen the most recent video of cats who usurp dogs' beds? Too funny for words. Poor dogs, they just don't know what to do.

While those cats who 'people' the Internet obviously have enamored owners and caregivers, there are too many who end up homeless or feral, or sick and in need of specialized care because of abuse. This books talk about those (mostly young people) who have taken up the cause to provide shelter, attention and hope for so many of our feline friends.

Rob Laidlaw is himself a champion, having worked for more than thirty years to advocate for and protect animals. He speaks with thousands of people every year about our responsibility to ensure better conditions for all animals.

In his introduction, he talks about hope:

"For anyone who cares about cats, there's a lot to be concerned about. But there is also a reason to hope. Thousands of people around the world are doing their part to help cats. You'll find many organizations on the Internet."

He then begins with a close look at 'felis catus', providing an overview of cats and their world. It includes sidebars of useful information and excellent clear photographs of these acrobatic charmers. He also shares pictures of various breeds and talks about The Hemingway Cats that live in the house and on the property that was Hemingway's home and is now a national historic site:

"Many people believe the cats are descended from a six-toed cat named Snowball, a ship captain's gift to Hemingway in the early 1930s. The cats go wherever they please, and the museum staff cares for them."

Other chapters discuss feral cats, shelters, fostering cats, adoption, and raising funds and ensuring that the plight of so many cats gets the attention it deserves. There is much to consider when weighing the options for cat care, and enduring myths about which cats might, or should, be adoptable. But, the best part of the whole book comes when Mr. Laidlaw describes the 'champions' in detailed profiles, for the work they do to ensure that cats are safe, well fed and loved.

"When Rachel Cohen was nineteen, she had an amazing idea: Why not connect homeless teens with shelter animals? The teens would learn to care for animals, and the animals would get the love and attention they needed. In 2009, Rachel's inspired idea became Hand2Paw, a Philadelphia, Pennsylvania organization that helps service agencies and animal shelters develop programs for dozens of homeless teens and thousands of animals."

There is plenty of good advice for those new to cat ownership, asking that all aspects of having a feline friend be considered before making any decision. He notes the costs, and the work involved whenever anyone decides to add a pet to the family.

An index and a guide to resources adds interest. There are ideas galore that can be shared to help improve the lives of the many kittens and cats that are in need of help throughout the world. Just one of them might appeal to you and your family. Check it out!
Posted by Sal's Fiction Addiction at 3:43 PM