Barnum's Bones: How Barnum Brown Discovered the Most Famous Dinosaur in the World. Written by Tracey Fern and illustrated by Boris Kulikov. Farrar Strauss Giroux, Raincoast. 2012. $19.95 ages 7 and up 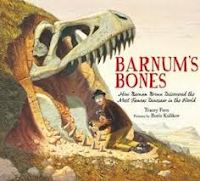 "One day Barnum spotted some boulders that had tumbled down a steep cliff. He scrambled off his horse and up the cliff. He found a bone the color of milky coffee sticking out of the hillside. Barnum swooshed away loose sand with a soft brush."

It's always quite fascinating to read a story of a child completely enamored of one single thing. For Barnum Brown, his great love for fossils begins when he is a toddler. As he follows his father's tractor through fields nearby, he gathers anything of interest and takes it home. He certainly has a nose for fossils.

That interest never wanes. He studies his collection constantly, trying to picture the world as it once had been. As a teen, he takes a course in paleontology...and the rest shall we say, is history. He proves to be an exceptional student, and is asked to spend summers on fossil hunts. The work is difficult. He doesn't notice:

"Barnum set out at sunrise. He hiked over mountains, across creek beds, down precipices, through streams, and around rattlesnake nests. Most folks would think this was torture. Barnum thought it was wonderful."

His reputation grows as his collections do. Without a dinosaur on display, the American Museum of Natural  History hires him to dig for them. He finds many fossils, but no new species. That all changes in 1902 in the Montana badlands:

"Finally, Barnum began to see the outline of a massive curving bone - a dinosaur's pelvis. Then he uncovered a few of the creature's backbones, a thighbone, an arm bone, and other fragments. Barnum had never seen anything like these bones before."

"Barnum, who was an unusually good dancer, celebrated his find at a nearby ranch by doing the tango and two-step until midnight."

This is a book that makes scientific discovery engaging and worth pursuing. Barnum Bones gives his life to research and hard work. His interest never wavers, and his persistence is admirable.

Boris Kulikov creates playful scenarios at every turn, beginning with endpapers that show a dinosaur skeleton holding a journal filled with field notes, while dated letters between Barnum and his 'Dear Professor' flutter across the pages. He adds comedy with his muted, dusty illustrations. I have a few favorites...the lizard carefully perusing a newspaper report of dinosaur discovery, Barnum trekking trainward with numerous skeletons in hand following a wagonload of fragile bones, and the sunburnt and mosquito-plagued scientist with nothing to show for all of his hard work. It is such fun to pore over each page, looking for new delights.

An author's note and bibliography add further information and a useful guide for budding paleontologists. His is a remarkable career and I, for one, am indebted to Tracey Fern and Boris Kulikov for the roles they played in teaching me something new...yet, again!
Posted by Sal's Fiction Addiction at 5:28 PM