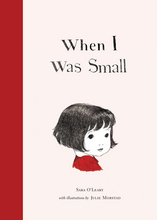 
There is something so gentle and lovely about this series of books that allow me to enjoy being with Henry and his relentless questions. The first two, When You Were Small and Where You Came From remain some of my favorites for sharing with young readers. This time Henry is more interested in his mother's early life than his own.

He asks for a story about her childhood and she gently obliges. Her series of short snippets of earlier times are as wild and weird as previous stories about Henry. Each one of her when I was small starters is shown on a single page that faces an accompanying illustration by Julie Morstad. It is a great partnership and makes me eager to see what they will do next.

His mother doesn't mean 'when she was young'; rather, she interprets his question literally and tells tall tales about being small enough to wear her doll's shoes, and on it goes! She provides perfect, soft scenarios for her quiet, inquisitive son. She even adds a nod to the story of the three bears with the beds that she tries in the doll house built by her father.

It begins with Henry's observations and question, and ends with his mother's lovely assurance:

"When I was small, says his mother,
I couldn't wait to grow up.
Because I knew one day I would have
a small boy of my own."

The details in Julie Morstad's artwork add to the genuine charm of the telling. She interprets each small remembrance with her subdued palette and gentle warmth. The bonus is that in talking about when a parent was younger, it might also spark true stories of childhood that can be shared and savored.
Posted by Sal's Fiction Addiction at 12:13 PM