Seeds of Change, written by Jen Cullerton Johnson and illustrated by Sonia Lynn Sadler. Lee & Low Books, 2010. $18.95 ages 8 and up 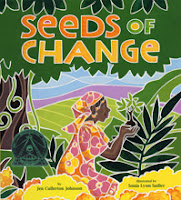 "Wangari wrapped her arms around the trunk as if hugging her great-grandmother's spirit. She promised never to cut down the tree."


It's inspiring to have another book about Wangari Maathai, the first African woman and environmentalist to win the Nobel Peace Prize (2004) for her work in Kenya. Growing up there, she learned a love of the mugumo from her mother. She watched as monkeys climbed its branches, as birds sang songs from their airy nests, as animals and people shared its fruit. As she sat in its shade on hot afternoons, she learned that her people believed their ancestors' spirits found solace there.

Wangari's thirst for knowledge led to an education that few girls in her small village received. When she wanted to further that education she moved away from her family and studied in Nairobi, before going to the United States for university studies. There she was greatly encouraged by her professors and eventually she returned to a teaching position at the University of Nairobi.

Much had changed in Kenya since she departed for studies in the United States. Trees were being cut down and the environment destroyed to make way for 'progress'. She knew it would have a detrimental effect on her people. She set out to replant the trees that were being destroyed. Encouraging women to join her, they formed the 'Green Belt Movement' which has led to the planting of  thirty million trees! That work resulted in a renewed respect for the land that was being systematically destroyed. The Nobel Prize, when it was presented, was a worthy thanks for the environmental concern she held for her beloved country and people, and for the future of our world.

There is much to ponder here for older readers. Maathai faced numerous obstacles as she sought her doctorate degree in biology and further, as she struggled against those greedy for the land that had sustained her ancestors and her village.  It holds a worthy place alongside three other books about this remarkable woman...Planting the Trees of Kenya (2008), Wangari’s Trees of Peace (2008), and Mama Miti (2010).

Using scratchboard and oils, with bold color and white outlines, Sonia Lynn Sadler has created lush quilt-like spreads which have at their heart the sacred mugumo tree that has inspired Wangari's life work. It is a beautiful book!
Posted by Sal's Fiction Addiction at 8:45 AM