Your, Turn, Adrian. Written by Helena Orberg and illustrated by Kristin Lidstrom. Translated by Eva Apelqvist. Groundwood Books, 2019. $18.95 ages 8 and up

"Sometimes the teacher
asked me a question.

My heart was pounding.

My head was in a fog.

Adrian is not like the other kids in  his school. Because of it, he is bullied. He would prefer never to be called on to answer questions or participate in class. He dislikes attention being paid to him. It causes anxiety, and adds to the notion that he is too different to be accepted by his schoolmates. He does like climbing trees and eating his lunch on his own. We learn quickly that he is athletic and strong, doing headstands and walking on his hands on the trip back home after school.

When he meets Heidi, a large lost wolfhound, he finds a soul mate. The two spend all their time together; Heidi even attends school with him. That makes a marked difference to Adrian's confidence and ability to cope with the demands of the classroom. Unfortunately, Heidi is reunited with her owner, Adrian has trouble coping. Once reunited with the dog, Adrian meets her owner and discovers a welcoming world where his talents come to the forefront.

Most of this poignant and heartfelt story is told through its emotional and telling artwork. Ever-changing perspectives provide a clear look at Adrian's life and emotions. Using black and white to suggest the bleakness he experiences, and then colorful images to share the love and joy is inspired and makes for a wonderful 'read'. 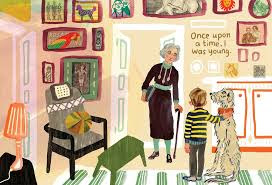