Because, Score by Mo Willems and Performance by Amber Ren. Disney/Hyperion Books for Children, Hachette. 2019. $18.99 ages 5 and up 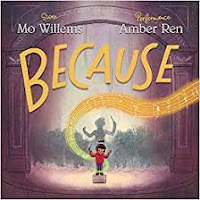 "Because workers checked
the lights and the seats and
swept the floors - the grand
hall was ready.

Because the time had come -
the ushers opened the doors.

Because someone's uncle
caught a cold -
someone's aunt had an extra
ticket for someone special."

This is a beautifully quiet cause-and-effect homage to the power of classical music in one young girl's life. It all begins long before she hears her first concert - with a man named Ludwig whose music  encouraged another young man (named Franz) to write some of his own. Contemporary musicians, all admirers of Schubert's work, decide to form an orchestra. In turn, they send out invitations to a wide variety of accomplished musicians asking them to join them.  The orchestra grows, and is soon ready to for its first concert.

In the meantime, a graphic designer is creating a poster about Schubert's work to announce that concert, a train conductor is dropping another kind of conductor at the concert hall, and the orchestra is settling in for its initial performance. Inside the concert hall, workers are making sure the hall is sparkling clean and ready to welcome concert goers. The ushers open the doors.

Not too far away, an uncle is confined to bed with a cold, leaving an aunt with an extra ticket for someone very special to her. The aunt and her special guest find their seats, and ready themselves for the music.

"In row C, seat 14 -
sat the girl with the uncle's ticket.
She heard the beautiful music written by
the man named Franz -
and it changed her."

It inspired her to follow the path that led to another very special musical performance. This book is not just about music - although music is at its heart. It is also about many small moments, one affecting the next. It is about the people who help make something extraordinary come to fruition. It is about hope, hard work, and wonder.

Amber Ren's gorgeous illustrations are filled with the joy and power of music. They present a multicultural community consumed by that joy, and supportive of the arts in personal ways. Every spread is filled with inviting details and is awash in music.

Do you have a BECAUSE moment? Can you tell someone about it? 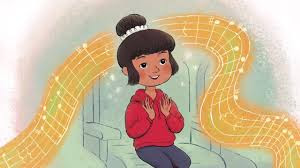