A Voice for the Spirit Bears: How One Boy Inspired Millions to Save a Rare Animal, written by Carmen Oliver and illustrated by Katy Dockrill. Kids Can Press, 2019. $18.99 ages 9 and up 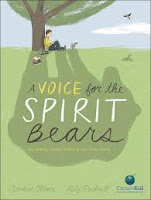 "TRY.
The spirit bears had no voice,
so he had to find his. He opened
his mouth and ...

... his words spilled out and
snapped into place! "By protecting
the home of the spirit bears, we can
ensure that they will be wild and
free forever." Simon went on to
explain ... "

Children can make a difference. They just need to care enough to raise a voice, and make it heard. Simon Jackson did just that. In childhood, he developed a love for bears. Simon's stuttering was a huge problem for him; he was teased and left out by his classmates.

In nature, he felt more comfortable and was even able to talk to the wildlife that lived in the woods behind his house. He read many books about grizzlies, his favorite bear at the time. Then, a news report changed his life.

"One day, there was a story about a forest
above Canada's border in Alaska that needed
protection. The trees were going to be cut down,
destroying the homes of the brown bears that
lived there.

Those bears are helpless, thought Simon.
It's not fair!"

He wrote letters, and raised money to convince the governments of both countries to protect the bear population. It worked. A park was created for their protection. That was only the beginning for Simon. Despite continuing difficulties at school, Simon was determined to do more research. His reading led to his discovery of the spirit bear, a rare species born with creamy white fur and found only in the Great Bear Rainforest of British Columbia, near his home. What could he do to help them?

Loving those bears and caring about their future gave Simon a chance to speak publicly about their plight. His passion for the cause lead to his being able to articulate clearly what he wanted others to know.

"He visited every classroom in the school. He
convinced students to put pen to paper. To stand
up for what was right.
Seven hundred letters flooded the government."

Although deforestation continued, Simon kept up his fight to protect the spirit bear. Word spread, thanks to his tireless work. With school friends to help, he established the Spirit Bear Youth Coalition. It attracted support and membership from all over the world. More and more people paid attention, including Dr. Jane Goodall. It remains his life's work.

In back matter, the author shares a short biography of The Real Simon Jackson, some notes on Spirit Bears, and offers a section on What You Can Do to Make a Difference.

If you are looking for environmental protection books and the part that your own children or your students can play in making a difference, add this to your growing bucket of titles. It's the newest addition to the CitizenKid collection from Kids Can Press, and worthy of your attention.
Posted by Sal's Fiction Addiction at 10:00 AM