Yogi: The Life, Loves, and Language of Baseball Legend Yogi Berra. Written by Barb Rosenstock and illustrated by Terry Widener. Calkins Creek, HIghlights. 2019. $23.95 ages 10 and up 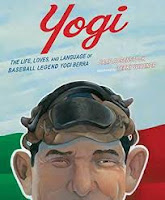 "Lawdie made people laugh,
but he wasn't trying to be
funny, just honest. Later, he
was known for the way he
talked. But in the 1930s, folks
on The Hill knew him as a
short, big-nosed, funny-looking
kid - one of the neighborhood
boys who went pazza!- crazy-
for baseball."
"WE WERE OVERWHELMING UNDERDOGS."

Ask any die-hard baseball fan and they will be able to quote Yogi Berra. I am sure of that. Barb Rosenstock uses some of his more famous ones throughout this terrific homage to the man, and the legend he became.

Yogi did not look like a ball player, but he had the heart and a love of the game that began when he was very young. Lawdie's (a nickname for Lawrence) heart was full of love for his family, his community, his friends ... and sports. He wasn't good at school, and didn't mind admitting it. He did love to make people laugh, and he loved baseball.

Lawdie wanted a chance to play ball; his father agreed that he could quit school and give it a try. With his friend Joe Garagiola, he joined a travel team, while holding  down a variety of jobs. Baseball always won out over a steady income. His play was not always appreciated by his coaches, but Yogi was a student of the game. He watched tirelessly from the sidelines. When Joe was offered a major league contract, Yogi was not. Finally, the Yankees gave him a chance. Following service in the war, he had to work back up through the minors, always with his sights on the Yankees. When his chance came, he did what he knew he could do ... play a great game. He was jeered by many, and hurt when told he didn't look like a Yankee. In true Yogi fashion, he had a witty comeback.

And hit he did. He made many teams nervous when he was up to bat. While he loved baseball, it wasn't always easy for him. Still, he just kept getting better.

"Between 1947 and 1963, Yogi's Yankees won the American
League pennant fourteen times. He earned a World Series ring for
each finger, more than any other player in history! He played nineteen
seasons in the majors and was named MVP three times."

When his playing career was over, he continued coaching or managing teams for twenty-nine years. What an accomplishment!

Terry Widener’s acrylic artwork gives readers a historical perspective and a real sense of the man we remember for his dedication, his love of the sport, and his endearing humor.

Those who love baseball already, or are showing an interest, will appreciate the back matter which includes an informative author's note, archival photos, stats, his many accomplishments, a link to his museum, an extensive bibliography, a note about yogi-isms, a variety of quotes about him, and a list of source notes. Bravo!