Origin of Day and Night, written by Paula Ikuutaq Rumbolt and illustrated by Lenny Lishchenkpo. Inhabit Media, Fitzhenry & Whiteside, 2018. $16.95 ages 5 and up 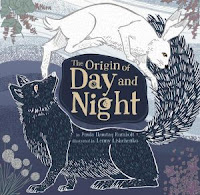 "At the very beginning of time, there was no light on earth. Darkness surrounded everything. Only nocturnal animals, those who could see in the dark, could easily hunt for food. Tiri, the Arctic fox, was lucky enough to have a pair of eyes that could see in the dark. He could hunt animals while they were sleeping ... "

This creation story mixes the best of the Inuit oral tradition. It is both a myth, and an animal fable. It concerns a time before there was light in the world. Spoken words had great power in the beginning. Once spoken, they could make things become true.

So it is said that Tiri, a nocturnal Arctic Fox, did not have any difficulty finding prey in the darkness. The ability to see there was strong. Calling "Taaq, taaq, taaq" ensured the land remained dark. Ukaliq, the Arctic Hare, needed light to see the path ahead and to find food. Calling "Ubluq, ubluq, ubluq", light would take the place of darkness. Now, Ukaliq could find the sustenance needed.

The two battled back and forth, changing the skies from dark to light over and over again, creating chaos around them. There was never time from one sky to the next to find the food needed. Something had to be done. Eventually, the two found common ground and allowed enough time for each to search for and eat a satisfying meal. Today we call those times night and day.

I am so pleased to be able to share cultural stories that provide a peek at lives lived by others. Ms. Rumbolt comes from a lively oral tradition, having lived throughout her life hearing the stories passed down by family members. Her retelling of one of the many stories that are part of her childhood helps children learn about tradition, compromise, and how to solve what might seem like a unsolvable problem.

The storytelling is just right. The illustrations bring it to life, with a black and white palette that only changes in moments of great wonder - the rising yellow sun, the surprised look on Tiri's face as sunlight makes it hard to see, the yellow of the animals' eyes, the dull red of the caribou meat.

Those who share this book will learn about Inuit folklore, the culture and language, as well as the northern setting and the natural habits of Arctic animals.
Posted by Sal's Fiction Addiction at 5:01 PM