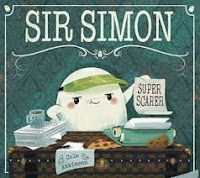 "OK, first of all, don't call
me 'Ghost.' It's Simon or Sir
Simon Spookington.
Secondly, Chedder -

Sir Simon is a 'haunter'. His business card reads that he is a 'super scarer' and a 'ghostest with the mostest'. While he has tried to scare many people in a variety of places, he cannot truthfully call himself a success. So, he is moving on ... to a house. It's his first. His chore list is long. Once his work is done, he wants to move on to trying his hand at much more important ventures.

"I'm into a bunch of things.

I'm even writing a
thrilling novel."

First, he will have to deal with the inhabitants of his new assignment. Imagine his surprise when one of the kids can see him, and wants to be his friend. Chester us willing to abide by the rules set our for him by Sir Simon. But, Chester is inquisitive by nature, causing great consternation for his ghosting guide. Back on track, Simon provides a lengthy list of jobs for Chester. This leaves time for Simon to pursue his story writing.

Poor Chester just can't get it right. Simon is always correcting him. It isn't long until Chester does what little kids do who are tired of listening and trying to follow directions. He falls asleep. In the morning, Simon has a change of heart and tries to be more human than ghostly. Now, it's Chester who is giving the orders.

Expressive illustrations accompanied by speech bubbles add interest that will have young listeners poring over the action and finding humor in the similar feelings that Simon and Chester have about  the tasks at hand.

“Chester isn’t the best at being a ghost, and I’m not so hot at being a human. But it turns out we are both pretty good at being friends.”
Posted by Sal's Fiction Addiction at 10:00 AM