Bear Came Along, written by Richard T. Morris and illustrated by LeUyen Pham. Little Brown and Company, Hachette. 2019. $23.49 ages 3 and up 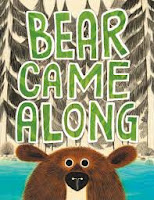 "Froggy was a lonely frog
who was looking for a friend,
but she didn't know how many
she had ...

until ... the turtles showed up.
The turtles tried to warn them
about the things that could go
wrong, but they didn't know
how much they would enjoy
the ride ... "

The river does not even know itself until the day Bear shows interest and curiosity in its presence. Bear has not seen a river previously and has no reason to recognize its power, until the fallen tree he is standing on falls into the water and carries him along on an adventurous journey in its fast flowing waters.

Frog, alone and friendless, jumps aboard looking for a friend. Turns out she does have friends ... the turtles, who are busy trying to warn her about things to come. When Beaver joins them, he proves he is meant to be in charge but doesn't recognize there is trouble ahead. And so on, and so on, and so on ...

When they realize a waterfall might be their downfall, they ride it out, clinging to each other and delighted to find a peaceful and beautiful ending.

"So many different animals
living their separate lives,
but they didn't know they
were in it together ... "

The rhythmic and repetitive text will please young readers, and have them clamoring to hear it again and again. The large format, full page spreads, and changing perspectives assure interest and much discussion for the action. LeUyen Pham proves her mettle with expressive faces as the animals learn about the turns one day can take, and the fact that being together is certainly better than being alone. With the addition of each new forest creature the colors used intensifies; the final spread is joyous.
Psst! Don't miss the endpapers!

Dramatic and humorous, it is a great book for reading to a group.
Posted by Sal's Fiction Addiction at 10:59 PM