Charlie & Mouse Even Better, by Laurel Snyder and illustrated by Emily Hughes. Chronicle, Raincoast. 2019. $21.99 ages 6 and up 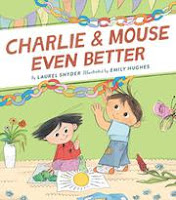 "These," said Mouse, "are the
best pancakes ever."

"Yes," said Charlie. "But
they could be better."

"What would make them
better?" asked Mom.

This is the third book in the Charlie & Mouse series of early chapter books for kids; another is promised for the fall. The short chapters and readability make them a great choice for early years classrooms. The fact that they are a series, involving familiar characters and family situations, boost confidence and enjoyment for fans of the two earlier books.

In the first chapter, we find the two complimenting their mom's pancakes, with a caveat. They could be smaller; the baby ones are much appreciated and praised. But, Charlie has a further request - pancakes shaped like a turtle, then a dragon. It is easy to see Mom becoming increasingly annoyed with the requests. When it is too much, she offers a warning.

End of chapter, and on the the next. This concerns a secret shopping trip to get a birthday present for Mom. Pondering together, they come with a terrific idea. Once home, they run into some difficulty. The following chapters show Dad and the kids make the final preparations for surprising Mom. The chatter between the children and the resulting celebration are humorous and full of warmth.

Artwork is appealing, and adds context for young readers. 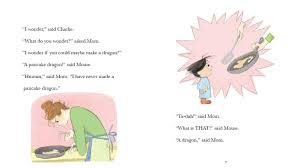